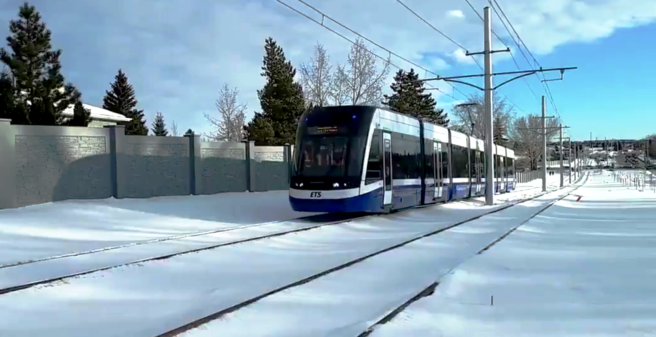 The Canadian winter clearly is no obstacle for the beginning of the first test rides on Edmonton’s newest urban train line: The Valley Line. The new Bombardier „Flexity Freedom“ low-floor tramways started its first moves in and around the depot during mid-January, and since 7 Februay regular test trains are running – currently on the section along 66 Street, between 34 Avenue and 51 Avenue. The test will be gradually extend – depending on the completion progress of the new line.

First part of the Valley Line Light Rail is due to open in early 2021 – it covers a 13.1 km strech between downtown Edmonton and Mill Woods. An extension westwards to Lewis Farms will convert the new route into a 27 km cross-city line – opening is planned for 2027.

Edmonton is well-known for having introduced North Americas first modern light rail line in 1978. This line has been gradually extended over the years and forms now a network of 24 km two-route system with 4.4 km underground – operated by Düwag and Siemens light rail vehicles of two different types with access at high-floor platforms. In contrast, the 26 new Bomardier light rail vehicles numbered 1001-1026 follow modern European low-floor tramway standards: They have seven articulated segments, are 42 m long and offer 78 passenger seats and a total capacity of 275 passengers.

A network scheme of the Edmonton system can befound here: http://www.urbanrail.net/am/edmo/edmonton.htm