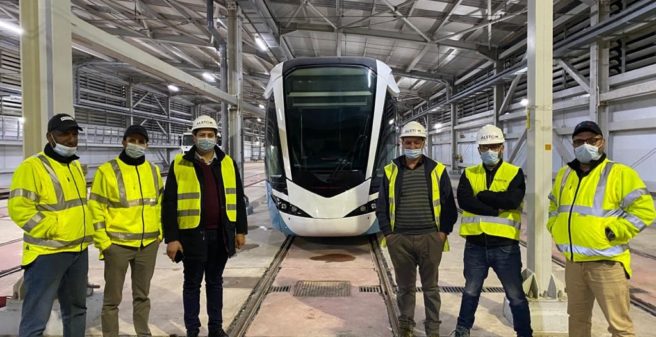 The newest of Algeria’s tramway systems under construction is in the city of Mostaganem with some 150,000 inhabitants. A standard-gauge low-floor tramway will serve a main route of 12.2 km length with 20 stops and a branch line of 2 km with 4 stops.

Alstom as partner in the construction consortium has now successfully conducted the first test-runs in the city which is to become the country’s seventh new system after in Algiers, Oran, Constantine, Ouargla, Sétif, and Sidi Belabes – all opened between 2011 and 2018. The test-runs were performed on a 2 km stretch between the secondary storage park T2 section and the SNTF station. Further intensive testing will follow, finally over the full length of the line, before the opening of public service will occur. This is not expected before the end of 2021. The first test was attended by the Algerian Minister of Transport, Lazhar HANI, the Governor of Mostaganem, Isaa Boulahia and representatives from Alstom Algeria. For this project, Alstom and Cosider Travaux Publics/Cosider Ouvrages d’Art are in a single lot configuration.

Alstom supplies the integrated system, tracks, catenaries, telecommunications and signalling, substations and ticketing equipment. The 25 Citadis 402 tramways are 43 m long, have 7 modules and are assembled at Annaba in the north-eastern part of the Algeria by Cital, Alstom’s local joint-venture founded in 2010.

Several modern tramway systems have been opened in Algeria as well as the country’s first metro since 2011. Read also our full report here: