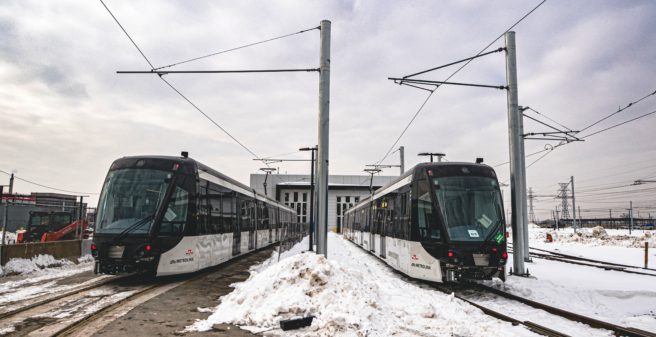 First test runs outside the depot on 21 February 2022 | © Metrolinx

Canada’s largest tram network in the metropolis of Toronto has been undergoing expansion and modernisation for some time already, but public transport in the outer areas of the metropolitan area is also being strengthened by means of new rail links. Three new light rail lines which are not interconnected, are under construction today. Metrolinx, as the Ontario Transport Planning Authority, is the public agency responsible for the expansion projects.

In the Northwest of the town, the 11 km long Finch West Light Rail Transit line is currently being built as a separate, new light rail system on its own track. However, like the other two new light rail lines – Eglinton Crosstown LRT and Hurontario LRT – it is being built using European standard gauge, while the traditional 12 tram lines run on 1,495 mm gauge. This means that the systems are not compatible, but they are physically separated anyway. Construction on the Finch West LRT began in early 2019 and is now well advanced, so the planned opening in 2023 seems realistic. The Canadian Mosaic Transit Group is building the system under a design, build, finance and maintain turnkey contract.

The Finch West LRT will connect the Finch West Metro station with Humber College. The first short sections, starting from each of the two end points, will run in tunnels. In Finch West, this will provide fast underground interchanges to Metro Line 1.

The continuous double-track line is otherwise laid on its own track to a large extent in the middle of the street, and neuralgic traffic points and intersections are passed underneath at a low level. A total of 18 stations will be served. The maximum speed of 80 km/h can only be reached over short section due to the short distance between stations. The depot is located between Norfinch Oakdale and Jane and Finch stops.

A route map of the new line in context with the other lines in Greater Toronto can be found here:
https://www.urbanrail.net/am/toro/toronto.htm

The first of 17 four-car “Citadis Spirit” trains from Alstom intended for the Finch West LRT has been on site since August 2021, and the first tentative test runs outside the depot under power now began on 21 February 2022. In the cold winter weather, the first car started driving tests at walking pace over a length of around 700 metres. The test runs will be extended step by step and will then gradually cover the entire length of the line, as far as already completed.

The “Citadis Spirit” are part of a series of 61 such low-floor trains that were ordered at fairly short notice in 2017 after domestic manufacturer Bombardier faced significant delivery delays of its Flexity light rail vehicles. Alstom has since taken over Bombardier. The 61 light rail cars are now being delivered to the new Finch West LRT (17 units) and to the Hurontario LRT in the Southwestern part of Greater Toronto Area (44 units) – currently also under construction. The first section of the Hurontario LRT is expected to be inaugurated in 2024, assuming construction continues on schedule. By the way, similar vehicles are operating on the first light rail line Confederation Line in the capital Ottawa – we reported here already:
https://www.urban-transport-magazine.com/en/ottawa-go-live-for-the-new-light-rail/

They light rail units are 48.5m long, composed by four sections, have 7 double-width doors on each side and are designed to carry 292 passengers, 120 of whom are seated. Overhead supply is 750V DC.