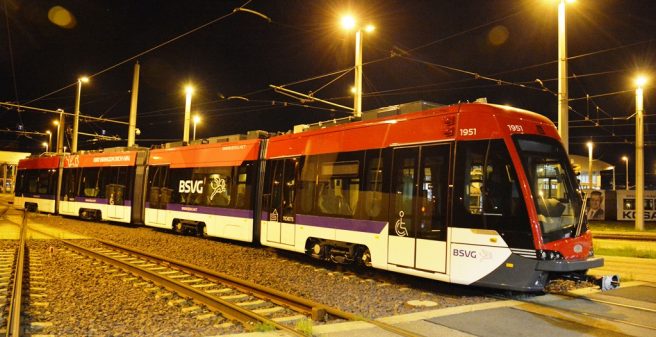 The first out of seven new Tramino II low-floor trams arrived in Braunschweig in the morning hours of 23 August 2019 - the manufacturer is now Stadler Pankow - the previous Tramino fleet having been built by Solaris I Photo: BSVG

In the early morning hours between of 22 August 2019, the first of seven new Tramino II trams arrived at the depot of the Braunschweig’s public transport operator BSVG (Braunschweiger Verkehrs GmbH). The four-section tram was delivered on a flatbed truck semitrailer. The transport from the plant in Poland where the new tram had been built, took three days: the departure in Poland took place on 18 August at about 22 o’clock, arrival in Braunschweig was on 22 August at about 1.15 o’clock. The semitrailer transporting the tram has a length of 46.5 meters, a weight of 59 tons, carrying the 50.8 ton tram. With a total of 109.8 tons, the transport was a real “heavy weight”.

Braunschweig, in English also sometimes being referred to as Brunswick, has a 39.6 km tram network of 5 lines with a unique track gauge of 1100 mm. How does Brunswick come to such an exotic gauge? Well, the Braunschweig tram goes back to an English foundation – and it seems that the British wanted to do something differently than anybody else…

Immediately after arriving in Braunschweig, the new tram was unloaded via a 15.5 meter long ramp onto the rails of the BSVG. A Tramino of the first series, built in 2014, pulled its sister vehicle to the tracks.

Later in autumn this year, the next two of the new Tramino will arrive in Braunschweig, and the last four will are expected until the end of December 2019.

With the new Tramino the last high-floor trams will be put out of operation. BSVG Managing Director Reincke: “We are able to offer a tram fleet which offers 100 % low-floor”.

Tramino II has been manufactured by “Stadler Pankow GmbH” based in Berlin whereas the production took place in Siedlce, Poland. This is not uninteresting, because the first series of Braunschweig’s Tramino’s in 2014 was still produced by the Polish company Solaris, founded in 1996 and which was only operating as a “bus builder” for most of its’ existence. Solaris is best known for its city bus “Urbino”, which is used in Europe and world-wide by many customers.

Change of manufacturers: From Solaris to Stadler

About a year ago, the Solaris founder family Olszewski sold the company to the Spanish rail and equipment manufacturer CAF. The main reason for the sale was the state of health of Solaris founder and CEO Krzysztof Olszewski.

At the end of June, Solaris presented its double-articulated trolleybus “Trollino 24” in Gdynia, Poland. On that occasion, Javier Colleja, the new Solaris boss (coming from CAF mother), said the chapter on tram construction at Solaris is over. At the moment we are working on a final order … and then Solaris is again a pure bus manufacturer. “We can use the capacity of our tram plant in Sroda Wielkopolski to expand our bus production.”

Solaris had already started a cooperation with Stadler for the joint production of trams, especially for the German market. After the end of the tram construction at Solaris, Stadler now probably continues this business alone.

Like the Tramino I of the 2014-Series, the new Tramino II in Braunschweig are four-section articulated vehicles with three articulations. Each tram has a length of 35.74 meters and a width of 2.30 meters. The capacity is of 205 passengers of which 80 can be seated. In order to improve comfort, the seat arrangement has slightly altered. For instance, the Tramino I had only one wheelchair space whereas the Tramino II has two of them.

The new Tramino is powered by five asynchronous traction motors with an output of 90 kW each. Power recuperated during braking is stored in supercaps and reused the next time it starts up.

Before entering commercial operation, commissioning and training has to be done. The driving and braking settings have to be adjusted, the driving behaviour has to be tested. There are also extensive tests for vehicle control. Eventually, the tram drivers have to be instructed on the new tram, even if Tramino I is almost identical to the already existing Tramino I. The final type approval will be carried out by the Technical Supervisory Authority in cooperation with TÜV Nord.

The order for the new Tramino amounts to a total value of 18.9 million EUR, equalling 2.7 million EUR per tram. The Lower Saxony State Transport Company (LNVG) contributes 50% of the costs.