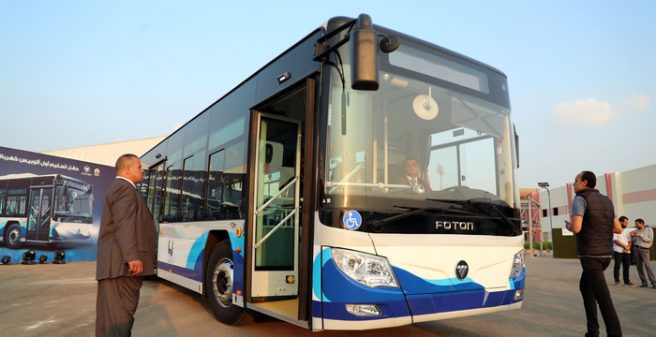 At the end of October 2019, the Chinese commercial vehicle manufacturer Foton presented the first electric buses being built in Egypt to the public and the press. For Egypt, this is good news for two reasons: so far, most buses have been imported and most buses were diesel buses. Battery and will help improving emission levels in Egypt’s cities.

Beigi Foton Motor Co. Ltd. was founded in Beijing on 28 August 1996 as a fully government-owned company, which was common at that time. Two years later, in 1998, production commenced. Foton produces all types of motor vehicles: from cars to vans and trucks to coaches and buses, for urban and interurban transport.

On a side note: Foton also acquired the brand rights of the legendary German “Borgward” car group, which went bankrupt in the early 1960s. Borgward was set to be revived with an SUV-model to be built in China, and a quite handsome prototype with the “Borgward-Rhombus” was presented … In the meantime, it has become rather quiet around the new Borgward. But the Chinese would probably not be the Chinese, if they give up that easily. Let’s see what the future will bring to “Borgward” brand…..

Foton is a very typical Chinese company in that it is already active in 110 countries, although the company is still very young. The firm’s production output is high with some 9 million vehicles of all kinds leaving the factories every year. Here, of course, the huge Chinese market itself plays a significant role.

In the meantime, a joint venture with Germany’s prestigious manufacturer, Daimler, was established.

As for its activities in Egypt, Foton has teamed up with two Egyptian partners, namely:

As a consequence, the Egyptian state is also a venture partner, which wants to significantly promote the industrialization of the country.

The contract between the three partners was signed in April this year. It foresees the production of 2000 electric buses in the next four years. All of the will be built in a factory owned by the Ministry of Military Production. The first 48 buses are to be completed there by the end of December.

In addition, Foton also intends to build a plant in Egypt for the production of charging stations for electric buses.

Last summer, Foton also announced a collaboration with Toyota and the company “Beijing SinoHytec” for the construction of fuel cell buses. One interesting future customer was already announced. 49 fuel cell buses with a length of 10.5 meters each will be delivered to the Winter Olympics 2022 in China.