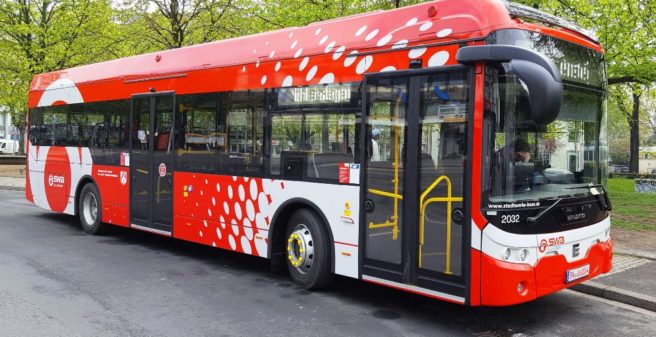 Historically, Bonn’s “SWB Bus und Bahn”, the municipal transport company of the Federal City of Bonn, always showed great interest in emission-free (or low-emission) urban transport. As early as in the year 1995, two MAN natural gas buses, 9501 and 9502, were tested extensively. But SWB faced a problem: there was no natural gas filling station in Bonn where they could refuel the buses. So every day they had to travel to Siegburg, 13 kilometres away, to do the refueling.

Nearby operator RSVG in Troisdorf (Rhein – Sieg Verkehrs-Gesellschaft) had a few natural gas buses in service, and SWB and RSVG agreed to a swap deal: RSVG received the two natural gas buses from Bonn, while SWB got two diesel buses of the same age from RSVG (henceforth SWB cars 9503 and 9504), which, however, had a much higher mileage than their former natural gas buses. The fact that SWB agreed to this exchange under such circumstances illustrates quite well that SWB was not really convinced by the technology.

However, SWB remained interested in buses with environmentally friendly drives. At the beginning of the last decade, the first battery-electric buses appeared on the roads. For example, the Chinese manufacturer BYD (still one of the world’s largest producers of electric vehicles) presented its eBus-12. During the summer of 2013, SWB tested such a BYD eBus-12 but was not totally satisfied with its performance.

Another electric demonstration bus followed, an Ebusco. The Dutch company Ebusco (“Elektro-Bus-Companie”) was founded in 2012 in Deurne (Eindhoven region). That first demonstration vehicle in Bonn was one of the very first Ebuscos ever: its body was a Chinese Golden Dragon, which Ebusco had completed into an electric bus. It completed its test rounds on line 607, and did so quite successfully.

This encouraged SWB to intensify its testing efforts with electric buses. Several demonstration vehicles from the manufacturer Sileo from Salzgitter arrived, and their performance was so convincing that SWB bought six Sileo S 12s at the beginning of 2016 (nos. 1501 to 1506). A seventh ebus of this type (no. 1801) followed in early 2018. The author often used these buses for rides through his home town. They had only one problem: Sileo had promised that they could cover 200 kilometres before they had to be recharged – in practice this was never the case. Thus, SWB returned them to their manufacturer.

At the beginning of 2020, SWB thought that the technology behind battery-electric buses had made sufficient progress and decided to procure another round of electric buses. Three articulated electric buses of the type “Solaris Urbino 18 electric” were ordered from Solaris, one of the pioneers of the electric bus and Europe’s largest manufacturer of such vehicles – which are currently in service in Bonn since the end of March 2021. In addition, Ebusco got the order to deliver four 12-metre-long solo cars of its “Ebusco 2.2”. They are making their rounds on all kinds of lines in Bonn since 26 April 2021.

The buses are so-called “depot chargers”. Consequently, they are not recharged en route on the line, but only during their respective overnight breaks via cables and combo plugs at the depot. SWB decided to go for this type of recharging system in order to avoid the construction and maintenance of charging stations along the routes which significantly reduces operational flexibility.

Like before, the objective remains to achieve a minimum range of 200 kilometres. The Ebusco will be able to manage that in any case, even if it is very cold and the buses therefore consume more electricity because of the heating and/or air conditioning systems running at full power. The manufacturer claims a range of 350 kilometres under favourable external conditions, which would enable services on almost all Bonn bus lines without recharging.

That the Ebusco has no difficulties with a distance of around 250 kilometres was recently demonstrated by four vehicles of this type in operation in Bad Tölz in Bavaria.

Modern battery buses show very clearly: Battery technology has made enormous progress in recent years. Not only in terms of range, but also in terms of weight. A modern electric bus does not have heavy lead batteries as we know them from our cars, but stores its traction current on the basis of chemical processes. Lithium currently plays a prominent role in these systems. But development is not standing still: in the meantime, the first electric buses are running with completely new, so-called “solid batteries”.

In addition, it is no longer unusual to store the traction current in a few large batteries (on the roof or in the rear where the diesel bus would have its engine), but in a large number of battery cells that can be accommodated on the roof or elsewhere in the bus with very little space requirements. For example, in the case of completely new developments, batteries are also stored underneath the floor of buses, which has the obvious consequence that such vehicles can no longer be used as low-floor buses.

The technical development of batteries is therefore in full swing, with no end in sight. The first manufacturers are saying that a range of 1000 (thousand) kilometres for battery buses is no longer unrealistic in the foreseeable future.

Let’s return to the new Ebusco in Bonn: Ebusco says that their batteries can be fully recharged in just four hours. And the cars can carry up to 90 passengers, just as many as a conventional diesel bus.

And another brief glimpse into the future

As early as October 2019, Ebusco presented the prototype of its “Ebusco 3.0” at its factory in Deurne. Unlike the current 2.2 model, the body of the 3.0 is no longer made of steel and aluminium, but of “composite” plastic. This makes the trolley 33% lighter than the 2.2, and this reduces power consumption. Ebusco has already announced a range of 500 (!) kilometres for the 3.0. And the battery cells have found an unusual place in the 3.0, namely under the low-floor(!) floor.

The first 3.0 production vehicle will be delivered in October this year to Munich’s MVG.