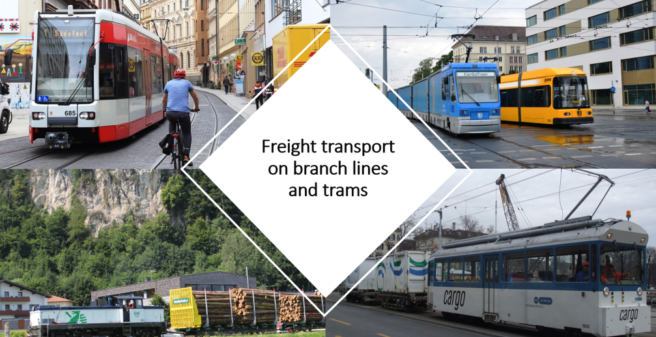 In 2014, the Zillertal Railway stopped transporting timber by means of trolleys and thus the last remaining commercial freight transport. Thousands of additional truck trips were therefore necessary in the valley. I reported on this unpleasant development in my book [1].

Fortunately, these timber transports between Jenbach and the Binder sawmill in Fügen were resumed in May 2021. This was preceded by:

The freight trains, which now run three times a day, consist of eight to ten wagons and transport up to 400 t of round timber. This eliminates 20,000 truck journeys annually [2].

In addition to the direct business partners Zillertaler Verkehrsbetriebe AG and Binderholz GmbH, the federal  State of Tyrol, ÖBB, Innofright Solutions GmbH Bruck an der Mur and the Austrian rail infrastructure company were involved in the project. In the future, the return journeys should be used more effectively by transporting sawn timber from Fügen to Jenbach.

A prerequisite for rail transport is an expensive infrastructure. Therefore, using them as widely as possible is a matter of economic reason. I am concerned about branch lines that see, in extreme cases, only a one-piece railcar per hour. In this extreme case cited as an example, the real great advantage of rail-bound traffic is also lost, which is the formation of trains. Before every expensive but necessary measure on the rail infrastructure, there will be a discussion of the economic and environmental justifiability, and with it the question of whether the “little bit” of rail traffic cannot also be shifted to the existing road network. A test from the point of view of environmental impact could also turn out negative, because it is essential to consider the so-called embodied energy of construction works [3].

An example of such broader uses of existing branch lines is the use of passenger railcars that can haul some freight cars (Fig. 6) or extra passenger coaches. In the case of mountain railways in Switzerland, the inclusion of goods traffic on the rack railways to car-free holiday resorts such as Wengen or Mürren is a necessity. A number of freight trains also run on other meter-gauge mountain routes, e.g. on the Rhaetian Railway, but freight wagons are also attached to regular passenger trains [1].

The Zillertalbahn uses its track network for local public transport but also for maintaining tradition in the form of the steam trains that are popular with tourists and residents alike, and now again for freight transport.

There is an interesting article on freight trams on Wikipedia [4]. Tram companies used to make their tracks available for the delivery of freight wagons. In the case of narrow-gauge networks, trolleys were also used, e.g. in Gera and Hagen [4]. The shunting trips were generally time-consuming, there were always disruptions in the timetable, so that this approach was discontinued soon after the Second World War. Figure 7 shows a historical postcard from the Romanian city of Arad.

The unsatisfactory traffic situation and air pollution in the inner cities has revived considerations in the last few years and decades to include the tram in the inner-city freight logistics. A distinction is made between the “last mile” approaches – directly to the end customer and “middle mile”. With the latter, the tram takes over goods on the outskirts or at the freight station and brings them to inner-city distribution centers, where they can be handed over to e-cars, cargo bikes or the like. The City Cargo Tram Amsterdam is an example for the middle mile approach. The classification into the two categories is sometimes difficult and is not necessarily handled uniformly.

A research report [5] presents in its chapter 3.1. a comprehensive overview of experiments and studies dealing with such use of the tram infrastructure. Unfortunately, many good, publicly funded projects did not succeed in the long term and were mostly abandoned for financial reasons (e.g. Güter (Freight)- Bim Wien and City Cargo Tram Amsterdam). In chapter 5.2. different types of transport are compared: Separate goods trams, partial use of the trams for goods in low-traffic times and regular trams with trailers. The advantages and disadvantages are compared. Notably, the last two variants do not require any additional drivers. There is thus a similarity to the passenger trains with goods transport that were often used in the past on the branch lines.

The Karlsruhe Institute of Technology (KIT), the Albtal-Verkehrs-Gesellschaft (AVG), the FZI Research Centre for Information Technology and other partners are developing a vehicle technology and logistics concept for a “goods tram” based on a Karlsruhe dual-system light rail system and are investigating the effects on road and rail traffic. The tram-trains connect the region to distribution centers. Thus, a middle mile concept is being pursued. A first adapted high-floor tram-train is expected to run in 2022. LogIKTram is part of the overall regioKArgo initiative, whose partners want to research and implement new forms of cross-modal goods loading and delivery transport.

The joint project LogIKTram, in which both the AVG and the KIT are leading participants along with several other partners, aims to develop a logistics concept and an information and communication technology (ICT) platform for future freight transport in tram and light rail vehicles.

As part of LogIKTram, the researchers now want to go one step further and develop a logistics concept and an information and communications technology (ICT) platform for future freight transport in streetcar and light rail vehicles.

From 2001 to 2020, the flow of materials to the “Transparent VW factory” at the Great Garden in Dresden was carried out by means of a freight tram CARGO Tram (manufacturer Schalke GmbH-Fig. 8). This should relieve the city center of additional truck transports. A product change at VW ended this freight traffic.

In Zurich, there has been a bulky waste collection campaign known under the casual name of the Kehricht (rubbish) Tram since 2003, during which certain stops of the network are regularly called at by the CARGO and the E-TRAM. There, the population has the opportunity to dispose of bulky waste and electronic waste directly on the attached car. According to my research, it is the only currently practiced inner-city freight transport solution. It follows the “first mile” principle, which, however, comes very close to that of the “last mile” because of the direct customer contact.

The transport of round wood takes place in the Zillertal again on the train! Following on from this success, the importance of using the rail infrastructure as diverse as possible, i.e. also for freight transport, is explained. This idea also leads to the freight tram. In some large cities in Europe, air pollution limits are permanently exceeded, which shows the need of action in various ways. The trams can also take over freight transport.

The Urban Transport Magazine offers the opportunity to discuss the topic raised through comments. We would like to receive suggestions in this way and / or learn about other application examples,  plans and initiatives.

42 Technology developed the Adaptable Carriage which was a finalist in the Rail Safety and Standards Board 2014 competition Tomorrow’s Train Design Today which automatically moves forward and backward facing seats out of the way on a passenger carriage to provide space for cargo during off peak times and allows the same amount of goods to be transported as one artic lorry, perhaps this could be installed in trams, however I haven’t read of any news of the Adaptable Carriage for a couple of years so I think the idea has been abandoned.