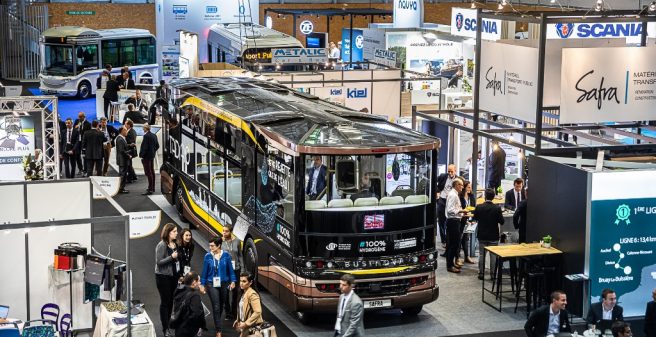 From 1 until 3 October 2019, the French Mobility and Transport industry met in Nantes I © B. MAZODIER / GIE Objectif transport public

The Southwestern French city of Nantes hosted an important public transport event from 1 – 3 October 2019. The so-called “Rencontres Nationales des Transports Publics » (RNTP, translates into national public transport meeting) is organised by the French Transportation Authorities Association (GART) and the Public and Rail Transport Union (UTP). The purpose of GIE Objectif Transport Public is to promote mass transit and raise the awareness of both industry professionals and the general public regarding issues of sustainable mobility. Every two years, the RNTP congress and exhibition takes place in a different French city. The other years, the so called “Transports Publics” congress takes place in Paris in June, the next being 23 – 25 June 2020.

Manufacturers exhibited a large variety of products and solutions in the halls of Exponantes, the Nantes exhibition center. Nearly 40 vehicles were presented during the exhibition, including several historical buses of the Omnibus Nantes fan club.

Exhibitors, delegates and visitors came together to present, discuss and showcase the latest trends and developments in terms of e-mobility, sustainable transport solutions and MaaS – Mobility as a Service-solutions. 12 workshops were held specific issues of the sector such as the MaaS, the energy transition, mobility in low density territories, the shared autonomous vehicle, free public transport for users…topics which are occupying transport planners and politicians worldwide.

The situation of the French Public Transport sector

The development of the French transport sector in the past years has been rather positive, with rising riderships figures on the one hand and continuing investment on the other hand side. The latest available numbers reveal that domestic passenger transport grew by 1.0% in 2017. This increase is mainly driven by public transport (+ 3.4%), which is growing faster than individual transport (+ 0.4%) according to government figures. The evolutions are different between the different types of public transport. Railways grew 6.0% in 2017, due to the recovery in economic activity.

It is very likely that the growth in public passenger numbers is linked to the continuous investment into bus, tram, light rail and metro projects all over the country. Between 2007 and 2017, the metro, regional train and tramway fleet sizes increased by 24% in France (+ 12% in Île-de-France/ Paris region and + 37% in the provinces). This development is driven by the expansion of the tramway network: the number of trains has more than tripled in Île-de-France and increases by 54% in the province over this period.

An overview of the activities of GART and UTP can be found here (in English/ French):

Overview of the activities and collection of Omnibus Nantes: