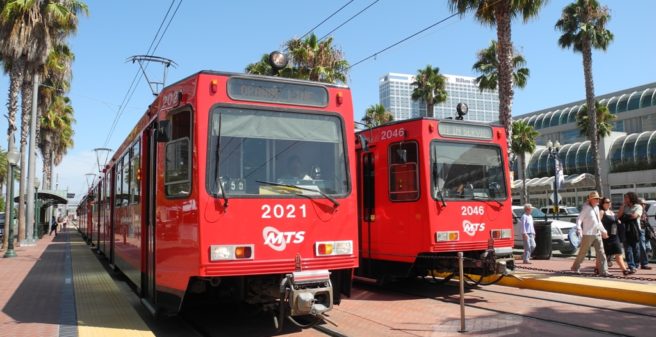 Two of the Siemens SD100 in San Diego, now replaced by new Siemens low-floor vehicles and to be transferred to Mendoza | © Robert Schwandl

The light rail system in Mendoza, Argentina, will once again receive a series of second-hand light rail cars from the USA. As in previous years, the vehicles are from San Diego in California, and they will be used to allow further expansion of Mendoza‘s network.

Metropolitan Transit System San Diego (MTS) is donating 39 six-axle articulated railcars of type SD100 from series No. 2001-2052 to Metrotranvia Mendoza. Siemens had delivered them to San Diego in 1994/5 – they were gradually replaced by new Siemens type S700 cars during the last two years. The first of these vehicles started their long journey to Argentina in February 2022.

Metrotranvia had been looking for well-maintained second-hand light rail cars for quite some time, preferably of the widespread Düwag-Siemens model U2 – because they had made very good experience with the 11 cars of this model previously bought from MTS more than ten years ago. These 11 units enabled the opening of the first light rail line in Mendoza in 2012, and another 29 units were to be added in 2014, also from San Diego. Discrepancies in the handling of the contract in connection with allegations of corruption, which were never fully clarified, ultimately led to only 7 more vehicles actually arriving in Argentina. 5 served as source for spare parts, and only 2 of them eventually operated again in passenger service.

Mendoza’s Metrotranvía system was built at relatively low cost converting an existing, out-of-use railway line in the city area for electric light rail service in 2012, was extended to 12.5 km in 2019 and quickly proved to be a successful model to improve public transport. We reported on the topic here: https://www.urban-transport-magazine.com/en/start-of-new-investments-in-mendoza/ . Further extensions have already been agreed, and this is precisely why more vehicles are needed. These expansions include the 6 km connection to the airport from the northern terminus at Las Heras, the extension of the current line in the southeast by one station to Maipú, and the construction of a 16 km long, partially single-track branch line in the southeast from current Pellegrini stop to Luján de Cuyo (Parque Ferri) in two construction phases.

Of the few remaining Düwag-Siemens U2s in San Diego, no. 1035 went to Memphis last year. It has been tested by the Memphis Area Transport Authority (MATA) on the tram network, which was otherwise operated by much older tram cars of various origins. After two vehicle caught fire, the „Trolley“ network had been temporarily out of service since 2014, but the the trolleys partly reopened in 2018. The purchase of some U2 trainsets is being considered for the return of passenger service on Madison Avenue Line.