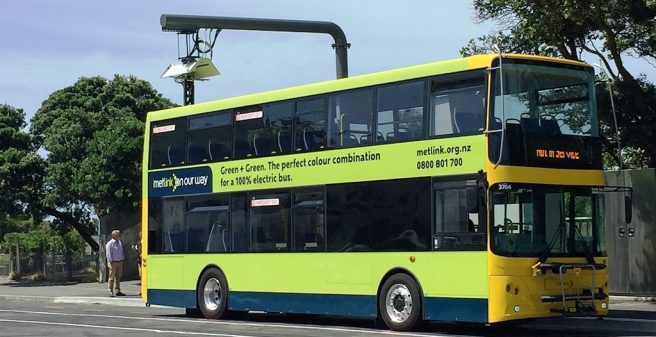 Battery electric buses with different charging alternatives begin to gain market share in the bus markets worldwide. However, there are only a few full-electric double deck models available in the market. Last year, Germany’s largest operator, BVG Berlin, announced the purchase of new double deck buses with diesel engines in accordance with the EURO 6 standard as there were no standard models available in the market. Instead, London took delivery of some Chinese models just recently.

Nevertheless, there are a few exceptions. In this context, it is worth taking a look at the other side of the earth, namely to New Zealand’s capital city Wellington, and the development there over the last two years. In 2017, the city completely abandoned its full-electric, modern trolleybus system – a decision widely debated and difficult to understand in the context of the worldwide revival of trolleybuses with state of the art In-Motion-Charging capabilities. Since then, large fleets of diesel buses dominate the streets. However, as the authorities promised to replace the trolley by “equally environmental-friendly buses”, a start was made with battery-electric double deckers.

Tranzit Group is a family-owned company and a nationwide operator of more than 1,500 buses in the country. This number includes 10 fully electric double deck (EVDD) buses in Wellington, operating as part of the ‘Metlink’ bus network in collaboration with the Greater Wellington Regional Council. These 10 buses operate with a rear-mounted pantograph, allowing charging at the terminus in Islands Bay, served by trolleybuses by October 2017. This enables high vehicle utilisation around Wellington city’s uniquely hilly topography and tight street infrastructure. EVDDs in Wellington are currently charged both on a slow charger overnight at the depot and via fast chargers. Each bus can travel up to 130km on a single charge. Recuperating when braking occurs in traditional coasting mode as well as when braking. This means that the 11 batteries located on the rear and underneath the bus are recharged while driving. Each bus has a battery capacity of 161kwh using Microvast lithium ion-based batteries.