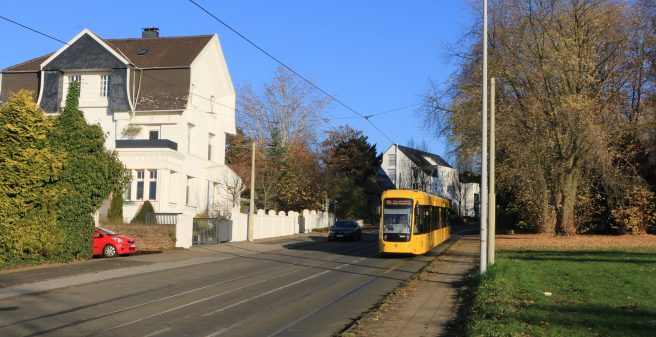 Route 104 at Kahlenbergviertel in Mülheim will be closed | D. Budach

For several years, the city administration of the medium-sized city of Mülheim an der Ruhr in Germany has made the public transport deficit largely responsible for the miserable situation of the city’s financial situation. Unfortunately, the tram system is now in the crossfire in Mülheim whereas it is praised worldwide for its modernity, environmental friendliness and flexibility.

In Mülheim the picture has been like this for years with the vicious circle worsening every year: service deterioration, declining passenger numbers, subsequent income losses and, in consequence, service restrictions, which in turn further reduce attractiveness of the system and hence lead to a further reduction in ridership. This can probably be called a downward spiral which is astonishing in a Germany-wide trend of increasing public transport usage.

Mülheim wants to shut down tram connections on a large scale, and it started already … years ago. The current scenario seems to be similar to the previous one: Investment backlogs in the infrastructure and the tense financial situation which makes replacement investments impossible, has led to the abandonment of the sections from the main cemetery to the airport Essen-Mülheim and to Styrum to the Friesenstraße. The closing of the sections Heuweg – Uhlenhorst and Oppspring – Kahlenbergstraße – Wertgasse have also been on the table for years, decommissioning has been decided by the municipal bodies already. For this scenario, repayment of subsidies would be required and is most probably the reason why this line has not been closed yet.

At the end of May 2019, plans were published for even further cuts which were submitted by the “Ruhrbahn” – the operator of the tram and light rail network in the cities of Mülheim and Essen. In order to alleviate the burden on the city’s budget, around 1.6 million vehicle-kilometers are to be cancelled. This corresponds to almost one third of the total public transport services in the urban area. In the area of trams and light rail, massive service reductions are planned. This would not only affect the Ruhrbahn in Mülheim, but also the connections to the neighboring cities. Buses should now completely replace line 104. Line 104 once used to be a direct connection to downtown Essen and ends today at the station Abzweig Aktienstraße in the Borbeck district of Essen near the city limits, where passengers have to interchange to line 105 to Essen’s city center. Aktienstraße, which was partly rehabilitated only a few years ago, would thus be rail-free and the rail connection between the two meter gauge networks Essen and Mülheim would be capped. In addition to the sections already mentioned for closure, the route of line 112 from the main cemetery to Oppspring or Tilsiter Strasse should also be abandoned. Line 102 should not be shortened to Heuweg, but to Broich cemetery. The timetable is currently being further weakened with stops being eliminated in order to reduce travel time, reduce the number of vehicle-kilometers and hence reduce operational cost. As a matter of fact, the quality of public transport and living quality of the city will deteriorate. Additionally, cuts in the bus system are also planned.

Plans for the standard gauge network as well

Even more surprisingly, the operator of the Duisburg tram system, Duisburger Verkehrs-Gesellschaft (DVG), plans to shorten the Duisburg-Mülheim city-connecting line 901. It runs around 2 km in a relatively new tunnel in Mülheim which was opened in 1998 and has its’ terminus at the main station underneath the city center of Mülheim. The plan is close this section and install a terminus in Duisburg city area at the Zoo – from there the line would be operated by buses. The question would then be what will happen to the tunnel section in Mülheim. Therefore, planners are investigating in how far the tunnel section can be used by the light rail line U18 which is a standard-gauge line like the Duisburger line 901. Line U18 connects Essen and Mülheim Central Station (Hauptbahnhof). However, for this scenario track configuration and bus stops would have to be adapted. The western terminus of U18 would be at the University Nord-West. At the time of its’ planning and construction in the 1960’s and 70’s, line U18 used to be the statuary example of right-of-way light rail development in the Rhein-Ruhr region. It should have been the starting point of the planned uniform expansion of the standard-gauge Stadtbahn Rhein-Ruhr system. Line U18 was opened in 1977/80. In comparison to Duisburg’s line 901, line U18 is a high-floor line operated with light rail type B trains. However, there are even plans to reduce frequency on line U18 to a train every 20 minutes which would mean halving the frequency.

The now presented changes in the Ruhr region have not much to do with customer-oriented and attractive public transport – which is a big contradiction to the recently started project “Netz 23” with the purpose to promote public transport. The drastic restrictions are expected to result in further significant reductions in passenger numbers, if all proposed measures are implemented. Public transport will thereby be reduced to a minimum. It will lead to the fact that only those who cannot afford a car or any other means of transport will use public transport. On the other hand, the service reduction of the tram system will have hardly any impact on one of the main factors influencing the high cost of Mülheim’s public transport system: The central tunnel sections in Mülheim’s city center are only partially with one tram line per tunnel at stretched intervals. This causes high operating and maintenance costs. The condition of the tunnels is far from modern in many places. At least, the reimbursement of subsidies is one of the reasons why the tunnels remain in operation for the time being.

An overview of Mülheim’s tram and light rail system can be found here: http://www.urbanrail.net/eu/de/e/essen.htm