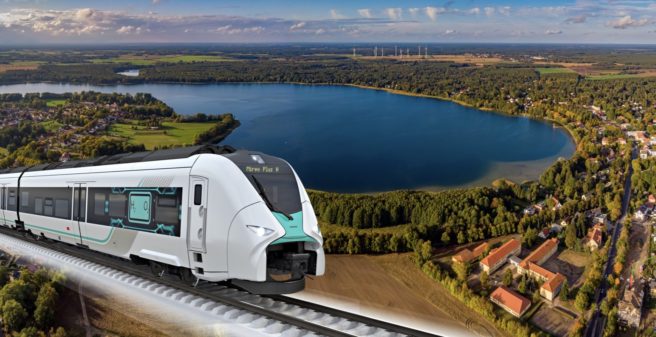 Figure 1: The Wandlitzsee is one of the main destinations for passengers on the Heidekrautbahn, seen here from the south-east, i.e. from Berlin. The train passes the lake on the right, the train station is next to the lido. The station ensemble in the "New Objectivity" style is under monument protection I Photos by © Daniela Kloth/ Siemens Mobility

A railway line with a very special history is located in the north of Berlin. The Heidekrautbahn (literally “heather-raiway”) was mainly built at the beginning of the 20th century so that the city residents could travel comfortably to the north Berlin lake landscape (Barnim district). The original route is shown in green in the route map (figure 2).

My parents owned a weekend property near the Schildow-Mönchmühle station from 1959. We have made wonderful trips from there by train. We took the bikes with us on the baggage car, and we often rode to the Wandlitz lake (figure 1).

Class 64 steam-locomotives pulled the trains, which mostly consisted of two-axle standard cars with a transition platform (figure 3, first car behind the locomotive) and a baggage car. In some cases, however, bogie cars were also used, which we enthusiastically called “express train wagons” as children (fig. 3). Away from town there was an annoying long stay in Basdorf, during which the locomotive drove to the coaling station and the water crane. Combined freight trains with passenger transport also ran in the evening. Sawmills, a furniture factory in Klosterfelde and the factory for cable recycling in Liebenwalde [1] (among others) ensured a respectable freight traffic.

After the Second World War, the Heidekrautbahn temporarily played an important role in the West Berlin bypass. The Berlin outer ring [2] was built for this bypass, but a provisional single-track route including the Heidekrautbahn was able to fulfill this in the north of Berlin already in 1950.

Measures to relieve traffic in the inner city of Berlin began in the 1920s, but the so called outer cargo ring railway that was temporarily built during the Second World War partially crossed what later became West Berlin. From a political and military-strategic point of view, however, the GDR and Soviet leadership needed an efficient, safe and complete bypass of what was then the western zone of the city. Realization began in 1950.

A provisional “advance” completion of the Berlin outer ring railway in the northern area was carried out via the Heidekrautbahn by building two single-track connecting branches to the Heidekrautbahn. This also ensured a shorter connection to the seaport of Rostock. The connecting branches were the routes to Berlin-Karow and to Fichtengrund (purple in Figure 1). This took place about two years before the corresponding section of the Berlin outer ring was completed. Even later, the Fichtengrund-Basdorf-Karow line was used as an alternative and relief option.

However, the crossing point in Schmachtenhagen was then no longer necessary. The area was used at the end of the 1950s as a test site for gauge-changing systems. It was a logical consequence of the close economic relationships to the Soviet Union that intensive research was carried out on this important railway topic at the time. However, like some other things (for example automatic center buffer coupling), it was also an endless research. From my point of view, there was ultimately a lack of courage and the ultimate economic compulsion to implement the technical solutions in series production. I also got to know the hesitant handling of technical innovations in my professional life [1].

When the Berlin Wall was built in 1961, the cargo connection and tourist traffic came unfortunately to an end. The Wilhelmsruh station was located in the border area, the main traffic of the Heidekrautbahn was first relocated to Berlin-Blankenburg, later and to this day to Berlin-Karow. Passenger trains only ran sporadically on the “old” branch up to Blankenfelde, until these too were discontinued in 1983. However, the cargo connection traffic to the state-owned company Bergmann-Borstig (manufacturer of power plant components, but also of razors) remained. After reunification, this company was first sold to ABB, then to Alstrom, and was significantly reduced in size. The areas that were freed up were converted into an industrial park in which, among other companies, Stadler Pankow GmbH settled. The railway connection is extremely important for the transfer of new trains until this day.

Until 1950, the Heidekrautbahn belonged to the Niederbarnimer Eisenbahn (NEB), which handled most of the traffic with its own vehicles. In 1950, the company was forcibly incorporated into the Deutsche Reichsbahn, whereby the associated contract farsightedly stipulated that renegotiations would have to be made if Berlin unity was regained. After the reunification, a special situation arose for Germany. The NEB again owned the infrastructure, but Deutsche Bahn was the operator.

It was not until 2005 that NEB became the operator of the Heidekrautbahn again. Diesel-mechanical railcars from the Talent series (picture gallery, figure 4) were procured. The route had previously been renovated at a cost of EUR 17.3 million. As a result, the travel time between Wandlitzsee and Berlin-Karow was reduced to 21 minutes, which was almost unbelievable for me. Accordingly, this attractive offer was well received, also by the many commuters. Passenger numbers skyrocketed.

Picture gallery – current photos of the Heidekrautbahn (click to open):

At the moment, the focus is on the renovation and reopening of the branch to Berlin-Wilhelmsruh, also for passenger traffic. On 11 December 2020, the groundbreaking ceremony took place at the Berlin-Wilhelmsruh train station. The route is scheduled to go into operation at hourly intervals at the end of 2024. From 2030 there will be an extension to Berlin-Gesundbrunnen with a frequency increase (½ hour). A daily freight train is also scheduled [3].

At the beginning of 2022, a research contract for the introduction of hydrogen trains was signed between the federal states of Berlin and Brandenburg and the NEB. This means that the procurement of seven trains, each with 140 seats, and the construction of the hydrogen infrastructure can begin.

At the beginning of February 2022, the NEB announced the supplier of the new hydrogen trains in the European Official Journal. Initially, six vehicles of the type Mireo Plus H from Siemens are involved. The procurement also includes technical maintenance support and the supply of spare parts by the vehicle manufacturer for the period from delivery in 09/2024 until the anticipated timetable change in 12/2034.

The award of this supply and service contract is dependent on the award of a contract within the framework of the envisaged SPNV direct award of the Heidekrautbahn (RB27) for ten years.

The profitability of the reactivation of the branch from Wensickendorf to Liebenwalde is currently being examined with a budget of 400,000 euros. Because soon a larger number of apartments will be built in Zehlendorf, the first step is to extend traffic to this village.