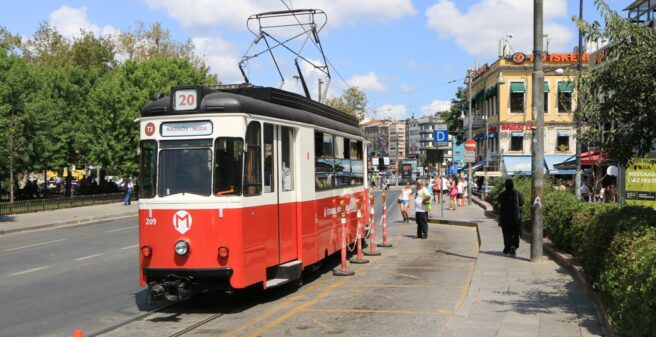 Following the great success of the short heritage tramway line in the European city centre of the Turkish metropolis of Istanbul which uses historic vehicles of the former metre-gauge tram for more than 30 years already, a similar line was introduced on the Asian side of the metropolis. The urban centre of Kadiköy, a metre-gauge circular route with a length of approximately 2 km started revenue service in 2003. Tram line T3 provides connectio to the busy ferry service, but also to the metro line M4 and to numerous bus lines.

Second-hand two-axle tram cars have been used ever since, built in the former GDR at Waggonfabrik Gotha and sold to the Bosporus after many years of daily service in different Eastern German cities. Two of them provide the daily service in Kadiköy today.

The fleet has changed over time, some vehicles being sold on to another tourist tram service in Bursa. Currently, four Gotha trams are available for passenger service, all of them of the T57 model and thus more than 60 years old. However, they have been extensively refurbished, the interior and also the window section are clearly different from the original design of these cars. Some of the trams were stored for several years before they were refurbished and put back into service. This includes the “newest” tram no. 209 (ex Schöneiche 78 ex Cottbus 93 / 50, according to other sources ex Bursa 201, 2010 ex Istanbul 207, ex Jena 104) and has only been in service since the end of 2021. It shines in a brilliant new red livery . The remaining Gotha T57 trams are: Nos. 202, 205 (ex Jena 102, 112) and 208 (ex Jena 115 or according to other sources ex Schöneiche 77 ex Cottbus 91 / 48).

In addition, there is a REKO TZ70 numbered 210, which previously operated in Schöneiche as no.  73, however, as being built in 1975 it is considerably younger and served as a work car for many years. The identical REKO no. 203 came from Schöneiche (No. 75) as early as 2003, but has been stored out of service for several time.

The T3 operates daily between 7 a.m. to 9 p.m. at 10-minute intervals. It is definitely worth a visit – best combined with the regular ferry service from Eminönü on the European side.