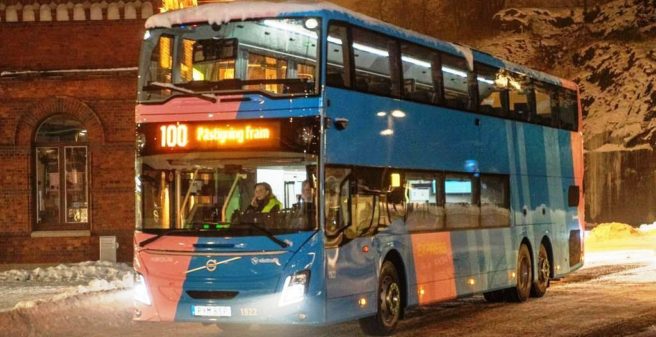 With the timetable change on 12 December 2021, Keolis Sverige, the Swedish subsidiary of the French transport group Keolis, has converted a 65-kilometre-long city-linking bus line between the main stations of the two cities of Gothenburg (with more than 550,000 inhabitants) and Borås (with more than 65,000 inhabitants) to the east of Gothenburg into double-deck-bus operationers.

For this Line 100, Keolis purchased 22 brand-new Volvo Type 9.700 DD double-deckers. The three-axle buses are 14,360 mm long and – especially important for a double-decker – 4,250 mm high. With this height, they could not actually be registered here in Germany, or if they were, then only with special permission. But in Scandinavia, more “generous” rules have always applied: in the Nordic countries, 15-metre-long buses were already on the road when solo coaches here in Germany were still only allowed to be 12 metres long at the most. And of course, the 25 centimetres of extra height ensure that both the upper and lower decks are more comfortable in terms of headroom.

Each of the vehicles offers 75 seats. As a matter of course, passengers have access to WLAN and USB connections during the journey. An interesting detail that is still unknown in Germany is the integrated (!) child seats. The cars are fuelled with biodiesel. Keolis emphasises that this makes them much more environmentally friendly than conventional diesel buses.

The new double-deckers have their home base at an existing Keolis depot in Gothenburg and at a new depot opened especially for them in Borås.

Based on experience with the old buses previously used on this line, Keolis expects 1.3 million passengers per year. The line operates between the main stations of Gothenburg and Borås and has only seven intermediate stops on its long route: Gothenburg Korsvägen (exhibition and congress centre), “Gothia Towers Hotel”, science centre “Universeum”, Museum of World Cultures, Liseberg amusement park and Gothenburg University. This seems to give an average distance of 10 kilometres between two stops. However, it is noticeable that all intermediate stops are in Gothenburg – and then it goes through to the main station in Borås without stopping.

In the run-up to the line’s conversion to the new double-deckers, Keolis has trained 45 drivers specifically for these carriages.

Keolis Sverige was founded in 2003. Today the company operates no less than 1,600 buses in four regions of the country, many of which are already emission-free. They cover 82 million kilometres per year. Keolis employs 4,500 people in Sweden to provide these services.