Hamburg: Refurbishment of metro line U 3 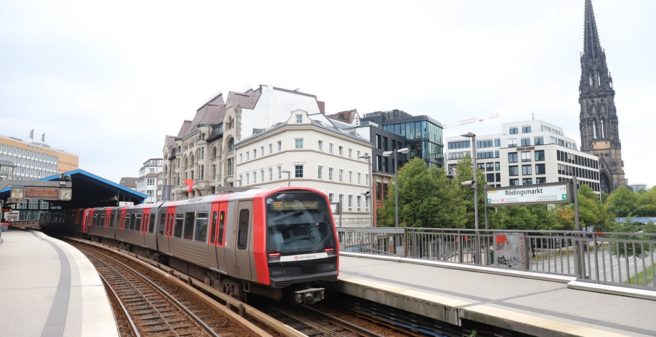 New construction of the low ground at Mönkedammfleet

Hamburg’s oldest metro line, today’s U 3 from the Hauptbahnhof (main station) via Rathaus (town hall) and along the “Hafenkante” (harbour edge) was inaugurated in 1912. That alone suggests that it might be appropriate to give the line a thorough overhaul. In addition, the section between Rödingsmarkt and Rathaus station marks the switch from the elevated alignment part of the metro – which gave the Hanseatic city’s transport system its name “Hochbahn” – to the underground tunnel section. Remarkably enough, the switch from the “plus-one” to the “minus-one” level has an incline of 5%, located within a canal bed. When the metro was built a hundred years ago, a concrete low ground was flush-mounted into the Mönkedammfleet in connection with a very tight curve, located entirely in the water. Why this complicated routing, you may ask, but the answer is quite simple: the space available did simply not allow for any other solution. Because the low ground lies in the water and also on muddy soil, it rests on oak piles, a construction method that has proven itself in the neighbourhood of large buildings such as the town hall and the stock exchange.

After more than 100 years in use, however, the supporting wooden piles of the low ground showed clear signs of erosion, making it necessary to demolish the construction and to replace it with a completely new one supported by steel piles. Steel is much more resistant to corrosion today than it used to be 100 years ago.

In order to demolish the low ground segment and to replace it with a new construction, the water level in the Mönkedammfleet had to be lowered. This work began last October and it is scheduled for completion in February 2021. Immediately afterwards, the old low ground will be demolished. This will, of course, require the suspension of services on the U3 underground line between Baumwall and Hauptbahnhof(-Süd) stations. In order to maintain the service on the remaining sections of the line, Hochbahn has installed track changes between the stops Baumwall and Rödingsmarkt in the west and Hauptbahnhof and Mönckebergstraße in the east, which did not exist before.

As early as in June 2021, the gap in the underground section of the line will be closed again step by step. Tunnel work is particularly challenging here. First, the base of the new low ground must be completed, and then the rest must be rebuilt. Jens-Günter Lang, Hamburger Hochbahn’s board member responsible for engineering, explains: “The measures are necessary now in order to be able to continue to guarantee passengers with a high level of reliability and safety on this important inner city connection in the future. In an intensive planning and preparation process, we have optimised all construction processes so that the route closure does not last longer than absolutely necessary.”

The closure will begin on 1 February and is scheduled to end after 14 months at the end of March 2022. Hochbahn says that in order to be able to offer passengers a good transport service even during the construction period, there is no need for special construction site lines. The network of other U-Bahn connections as well as S-Bahn and bus lines is too dense. In particular, Hochbahn recommends to use the numerous bus lines in the city centre during the construction period. In pre-Corona times, about 60,000 people travelled daily on the affected section of the U 3, but due to the pandemic, there are currently significantly fewer passengers.

Repair of the tunnel section between Mönckebergstraße and Adolphsplatz

The historic tunnel structure will be totally refurbished here. This concerns in particular the ceiling of the tunnel and its side walls. In addition, the tunnel’s waterproofing will be renewed to permanently protect its construction from moisture.

The bridge over Willy-Brandt-Straße, the Rödingsmarkt stop and the bridges over Graskeller and Mönkedammfleet are all being renovated, as will be the Mönkedammfleet stone viaduct. The steel viaducts will be completely “enclosed” in order to keep the inconvenience to residents at a minimum.

At this elevated station, the platform was partially raised a few years ago. This elevation will now be extended. In addition, the platforms will get a new surface and the stairs will be renovated. Finally, necessary corrosion protection work will be carried out on this over 100-year-old structure.

Between the Rathaus and Rödingsmarkt stops, the entire track of the metro will be renewed.

Expansion of the Rathaus and Mönckebergstraße stops

Jens-Günter Lang: “The preparatory work at both stops already started last year. Both stops will receive two lifts, raised platforms and tactile guidance systems.” In addition, the Mönckebergstraße stop in the direction of the main railway station will receive two new entrances and exits.

This will require Mönckebergstraße to be closed to road traffic for around six months from the beginning of March. The bus lines running in Mönckebergstraße will be diverted via Steinstraße for this period.