Hamburg: Start of construction at the eastern end of U 4 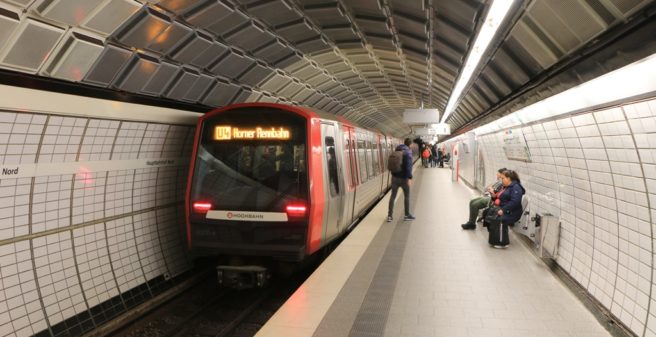 With a “digital ground-breaking ceremony” on 22 February 2021, Hamburger Hochbahn officially heralded the start of construction work for the extension of the U 4 underground line from the “Horner Rennbahn” station via the “Stoltenstraße” intermediate station to the future “Horner Geest” terminus. The new line will connect an additional 13,000 people to Hamburg’s underground network, who will reach the main station in only 13 minutes travel time. Not a bad journey time for a connection within a large city.

The extension of the U4 to Horner Geest marks another milestone in the expansion of the Hamburg underground. When the line went into operation at the timetable change on 9 December 2012 (test operations started already on 29 November), it first connected the new “Hafen-City” quarter to the city centre and further to the district of Billstedt. It serves the section between the city centre and Billstedt together with the U2, which, however, continues beyond Billstedt to Mümmelmannsberg.

Hamburg’s First Mayor Dr. Peter Tschentscher said at the digital ground-breaking ceremony: “The extension of the U 4 is an important investment in the east of Hamburg. The expansion of the underground and suburban railway is a central project of the Senate to improve mobility and climate protection in Hamburg. Our rapid transit systems already run on 100% green electricity and take over a million passengers a day to their destinations without traffic jams and parking problems. We will continue to improve bus and rail services for Hamburg’s citizens in the coming years, with denser intervals, larger vehicles and new connections and stops.”

In the future, the U 4 will leave the U 2 at the “Horner Rennbahn” stop in a north-easterly direction and connect its new terminus “Horner Geest” to the underground network for the first time via a 2.6-kilometre-long new line with the new intermediate stop “Stoltenstraße”. The entire length of the line will be underground underneath Manshardtstraße. The construction work is officially scheduled to begin in March. However, construction has already been in preparation since February 2020, when Hochbahn received the planning approval.

The contract to build the extension of the U 4 to the Horner Geest was awarded after a Europe-wide tender to the company “BeMo Tunneling GmbH” from Dortmund, which in turn is the subsidiary of a company from Innsbruck in Austria. According to Hochbahn, BeMo Tunneling is an internationally experienced and active specialist in the field of civil engineering, engineering and tunnel construction.

The first construction phase is located around the Horner Rennbahn underground station. It includes the extension of the station with a new (southern) side platform for the trains of both lines U 2 and U 4 travelling out of the city, a single-track tunnel, the connections to the existing lines and the crossing structure with which the new U 4 towards Horner Geest will be threaded out of the U 2. All these works are expected to be completed by the end of 2024.

Parallel to this, the excavation pits for the future tunnel of the U 4 underneath Manshardtstraße will be set up in the summer of 2022. Here, both the tunnel section and the underground stations will be built using the cut-and-cover method. Hochbahn emphasises that this is a safe and proven method, which was also used for the extension of the U 4 from Überseequartier to Elbbrücken.

The new underground station Stoltenstraße will be located at a depth of about seven metres. It will have two side platforms, each with stair access, and both platforms will have lifts at their respective western ends.

The Horner Geest underground station will have a central platform. Here, too, there will of course not only be an access via a staircase, but also an elevator. At the end of the station there will be a turning area for the underground trains. And it will be built in such a way, that the U4 can be extended further east in the future.

The three new underground stations Horner Rennbahn, Stoltenstraße and Horner Geest will be deliberately designed differently. This should not only look “not so boring”, but will also make it easier for passengers to find their way around which station they are at.

Hochbahn expects the entire construction project for the extension of the U 4 to be completed in seven years. However, it emphasises: “We will not be building on the entire line for seven years without interruption. Rather, it will be done in sections.” When the work is finished, “the hole” will be closed again, and the restored line can be rebuilt there.