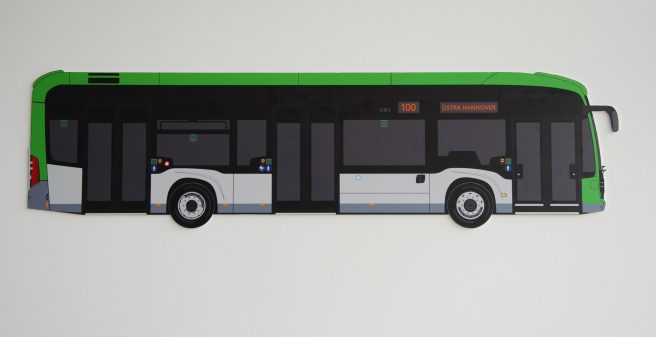 This is how the design of Hannover's new electric eCitaro will look l Photo: Christian Marquordt

6 August 2019: Ulrich Bastert, Head of Marketing, Sales and Customer Services at Daimler Buses, and Dr. Ing. Volkhardt Klöppner, CEO of üstra, have signed a framework agreement for the delivery of up to 30 12-meter Mercedes eCitaro and 18 eCitaro electric articulated buses to Hanover’s public transport operator, üstra. The first new eCitaro will be delivered at the end of this year and will start operations on lines 100 and 200 in the beginning of 2020. All electric buses will have been delivered to Hannover by the beginning of 2023. The reason for this is that in 2023, the conversion of all bus lines running into Hannover’s city centre will be operated by electric buses only.

Since spring 2016, üstra is operating three electric buses on the lines 100/200 with “Solaris Urbino 12 electric”, numbered 9601 – 9603. (these were not üstra’s first alternative-drive buses: the operator had already put into service some MAN Lion’s City with hybrid drive earlier). The three new Solaris were (and are) recharged via opportunity recharging: after each return journey on the lines 100 or 200, the buses stop at one of the two charging stations at August-Holweg-Platz. A pantograph is then lifted from the roof of the bus to the charging station, and after four minutes the battery is fully charged again, the power consumed by the bus on the previous line section is completely recharged again. (If a bus – for example, because of a greater delay – has no opportunity to recharge, there is always an energy reserve available in the battery).

For more than three years, the electric Solaris buses have been proven in service. The objective is to significantly reduce pollutant emissions in Hannover’s city center. This is why üstra decided to completely convert the bus routes in the city center to electric bus operation. These are the already mentioned ring lines 100 and 200 as well as the lines 120 from the Aegidientorplatz to Ahlem, line 121 between Altenbekener Damm and Haltenhofweg and the lines 128 and 134, both of which commute between Peiner Straße and Nordring. The conversion of inner-city lines to electric bus operation will reduce CO2 emissions by 3.8 tonnes each year.

The following number of electric buses is required for each line:

The three Solaris Urbino 12 electric are stored and maintained at the depot Vahrenwald where they can also be recharged, especially during the nocturnal break. As the electric bus fleet with the now ordered 48 more cars will be considerably larger, electric buses will also be stored in the depot Mittelfeld in the future. Therefore, both depots are about to undergo a major refurbishment. In total, there will be 14 charging stations after the complete conversion of the inner-city lines to electric bus operation.

Due to the result of the Europe-wide tender, Mercedes-Benz was awarded the contract to supply the 48 electric buses with its “eCitaro” in both the 12 m and the 18 m articulated versions. The new buses will use the same conductive charging system of the three existing Solaris, which, according to üstra, has proven itself in the three years of electric bus operation since 2016. This is interesting in so far as Mercedes favors “over-night charging” for its electric buses at the depot without opportunity recharging on the line. However, Mercedes has always emphasized that operators can of course also equip the eCitaro for pantograph recharging. Recharging can take place via a pantograph, which rises from the bus to the charging station (conductive recharging), as well as by means of a pantograph, which lowers from the charging station to the bus (inverted pantograph). Each of the 10 battery packs of the new electric buses will be dimensioned so that each of the new eCitaro can easily manage a battery range of 30 kilometers.

The costs for the electrification of Hannover’s inner-city bus lines amount to 52.7 million euros in total for the buses and the loading infrastructure. For this, üstra receives grants amounting to 22.7 million euros from the Federal Ministry for the Environment, Nature Conservation and Nuclear Safety. The Lower Saxony regional transport company (LNVG) provides a total 3.3 million euros. Üstra’s project share amounts to 24.7 million euro.