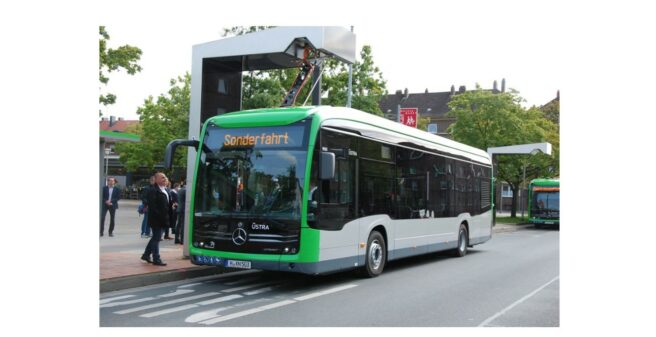 October 2022 saw the start of exclusive operation with battery-powered electric buses on Hanover’s circular lines 100 and 200 of the ÜSTRA. The lines start at August-Holweg-Platz, serve the city centre with its central points such as Kröpcke and Aegidientorplatz and sights such as the opera, city hall and Maschsee, and then return to August-Holweg-Platz. Here the line is changed after each lap: a lap of line 100 is followed by a lap of line 200, then line 100 again etc.

On both lines, ÜSTRA already started using buses in the middle of the last decade, at least some of which were already electric, namely MAN Lion’s City Hybrid. In 2016, the first all-electric buses followed: three Solaris Urbino 12 electric buses, 9601 to 9603, were put into service, which from then on were used on the two ring routes together with the MAN Lion’s City Hybrid. And in September 2020, the first Mercedes-Benz eCitaro followed. The manufacturer will deliver 30 solo and 18 articulated vehicles to the ÜSTRA by the end of 2022. See also our report: https://www.urban-transport-magazine.com/en/hannover-first-ecitaro-in-regular-service/

Hanover’s electric buses are designed for recharging along the line. For the two ring lines, this means that there are two charging stations at August-Holweg-Platz: a pantograph on the roof of the bus ascends to the charging station, and fresh green electricity flows into the batteries during the break that the driver and bus have here.

ÜSTRA CEO Elke Maria von Zadel characterises the conversion of lines 100 and 200 to operate only with electric buses as a “milestone for local transport in Hanover.” And she adds: “This also makes us a pioneer in the electrification and environmentally friendly design of bus transport throughout Germany.”

Fully electric on the road

ÜSTRA wants to draw the attention of Hanover’s citizens and especially the residents of the two circular lines to the changeover to exclusive electric bus operation and has therefore launched a “Fully electric on the road” campaign at the beginning of the month. “Line ambassadors” promote the new electric bus lines, and one of the carriages has been covered with transparencies showing the sights that the circular lines pass.

Line 121, which runs from Haltenhoffstrasse in the Nordstadt via the city centre to Altenbekener Damm in the Südstadt, uses articulated buses. Here, too, mainly electric articulated buses of the type Mercedes-Benz eCitaro-Gelenk are now in use. At the final stops of lines 120, 128 and 134, the infrastructure for recharging the electric buses (charging masts) is currently being installed. Von Zadel: “Through the continuous commissioning of new vehicles and the successful expansion of the terminal stops, we are getting a lot closer to our goal of running all lines in the city centre with electric buses by 2023.”