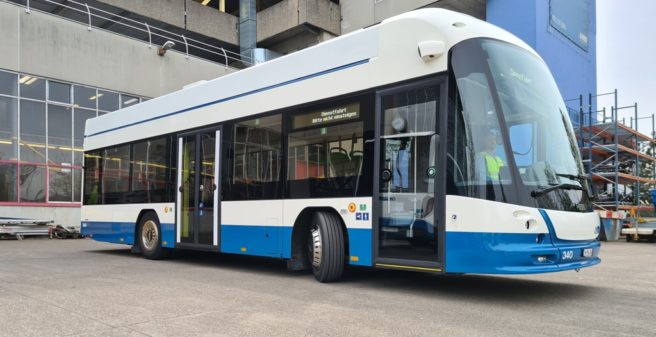 Carrosserie Hess AG based in Bellach in the Swiss canton of Solothurn reports delivery of a 12 metre long electric bus of its type “LighTram-12 Plug” to the “Busverkehr Grenchen und Umgebung AG (BGU)”. Starting this week, it will now be used on BGU’s regular lines.

The vehicle is the first new arrival at BGU after four Mercedes-Benz Citaro in 2021.

Heinrich Hess founded the “Carrosserie Hess” in Solothurn in 1882. Like many such companies, he initially earned his money by building carriages. But it was not long before Hess was also supplying bodies for “motorised carriages”, i.e. cars.

In 1919, Hess built its first bus. And soon Hess began to specialise more and more in the production of bus bodies. This was favoured by a peculiarity of the Swiss bus market: the (large) bus manufacturers Saurer, FBW and Berna – in reverse order of their importance for the market – did not (as good as) build complete buses, but supplied chassis with engines. The rest, i.e. the superstructures, they left to “outside coachbuilders”, of which Hess was only one among many. The first Hess articulated bus was built in 1961. Over the years, the self-supporting complete bus – in other words, the integral bus – became more and more popular in Switzerland, and renowned coachbuilders such as Frech-Hoch, Gangloff, Krapf, Ramseier & Jenzer, Rizzi, Schindler … What remained were Lauber (Nyon on Lake Geneva – of all places, this rather German-Swiss sounding name belonged to French-speaking Switzerland), Hess (Bellach) and Tüscher (Zurich). And Hess also bought Lauber and Tüscher … Finally, in 1987, Hess built the first low-floor omnibus trailer. At that time, this was a “difficult” field of activity for bus builders: with the exception of Switzerland, it was banned practically everywhere in Western Europe, for example in Western Europe’s largest bus market, the Federal Republic of Germany. The reason for this is quite simply that the bus-trailer combination needs more space in the bend with each additional axle: with each additional axle, the train runs in more towards the centre of the bend. If you want to avoid this, you need at least an elaborate all-wheel steering system for the trailer. When the first bus trailer train in the Federal Republic of Germany was re-registered in 2003 (by the Behrendt company in Kloster Lehnin near Berlin), some rejoiced that the bus trailer was once again permitted in Germany. Far from it, it is still banned (until today). Where it is to be used, it still requires a special permit. This is the case in Munich, for example.

Little by little, the factory premises in Solothurn become too small. But a site is found in neighbouring Bellach, where there is enough space for a new, modern factory.

BGU’s new Hess LighTram-12 Plug is a pure battery electric bus. Its name reveals two things: in terms of appearance, it leaves the typical design of a bus and deliberately approaches the look of a tram, and it is also a pure depot charger – it has nothing to do with recharging on the line. Charging is done exclusively overnight at the depot with the help of a CCS combo plug.

As is not surprising in Europe today, Hess is focusing on electric bus transport in the future. Due to the historical peculiarities of the Swiss Confederation, Hess is not only offering battery buses, but also trolley buses. And here again not only with the bus that is (can be) on the road only under the overhead line, but today also primarily with the “in-motion charger” or “dynamic charger”, i.e. a bus that drives from the overhead line where an overhead line is already in place – and also recharges its batteries from these overhead lines during the journey – but which otherwise is only on the road with the electricity from its batteries. The ratio of line with overhead contact line to line without overhead contact line can be as high as 30:70.

Hess is supplying a further eight new electric buses to the Zurich Transport Authority (VBZ), where they will gradually enter service on the district lines 35, 38, 39, 73 and partly 40. The buses in question are the LighTram 10 Plu model from Hess – a 10.7m long midibus. The batteries will be charged at new charging stations in the Hardau garage with electricity from completely renewable energy. In the basement of Garage Hardau, the necessary infrastructure is being built in several stages to charge up to 75 electric buses during breaks in operation. In a first step, the garage will be equipped with 45 charging stations from Siemens, 30 of which will have a charging capacity of 100 kW and 15 with 150 kW.

In addition to the electric quarter buses, four battery-powered articulated buses from the manufacturer MAN have been in operation since this spring, with 21 more to follow and also 15 twelve-metre-long electric standard buses. Together with its 83 trolleybuses, VBZ will thus have more than 150 full-electrical buses on Zurich’s streets as per end of 2023.