HESS wins tender for up to 70 battery trolleybuses 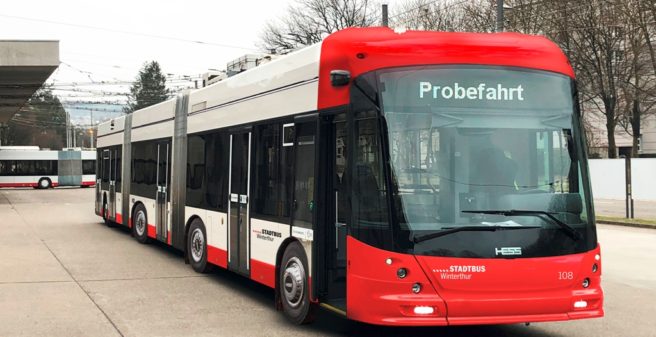 Design of the future double articulated trolleybus in Winterthur | © HESS

Last October, Stadtbus Winterthur launched a tender for the procurement of up to 70 battery-powered trolleybuses. Now, the contract was awarded to Carrosserie Hess AG in Bellach.

The framework agreement to be signed has a total value of approx. CHF 110 million, but does not commit the operator “Stadtbus Winterthur” to any order yet. The concrete awarding of contracts for the individual lots will be carried out via so-called “call-off forms”, which correspond to the respective vehicle requirements of the Zürcher Verkehrsverbund’s order and will be approved by means of a cost credit and a city council resolution. Stadtbus intends to order the first batch in May 2021. Initially, 12 double-articulated vehicles are planned. The first vehicle is expected in Winterthur in the summer of 2022. The framework contract includes articulated and double-articulated vehicles of HESS’ model “lighTram” equipped as battery trolleybuses, which are able to cover longer sections away from the overhead line in battery mode using the “dynamic charging” method.

In the long term, they are supposed to replace a larger part of the current trolleybus fleet and also make it possible to replace the remaining diesel buses on additional lines. Some of these already run on routes on which the overhead of the current trolleybus lines is already in place. In order to be fully electrified, there is only the need to install new overhead equipment on some shorter sections of the routes.

Electrification of lines 5 and 7

On 13 January 2021, the city municipal council approved the project for the electrification of lines 5 and 7 and granted the necessary funding. Winterthur uses trolleybuses for more than 80 years already (since 1938), but it now intends to largely convert all of its local bus lines to electric operation – as the (re-)introduction of the tramway, which had been under consideration for some time, was rejected some time ago, mainly for cost reasons.

Currently, the preparation for the planning approval procedure of the construction of new overhead for line 5 over 1.7 km from Eishalle to Ohrbühl and another 0.5 km from Töss to Rosenau is under way. Once completed, line 5 and also line 7 will also use the overhead contact lines of parts of the already existing trolleybus lines, on the route sections shared with them. The conversion of line 5 is scheduled for completion in December 2023, that of line 7 will follow thereafter, so that from 2026 onwards around 90% of the city’s bus services will be provided electrically, CO2-neutral and in a smooth and silent way. For the existing trolley bus lines 1, 2 and 3, various improvements including some route changes are planned for the next few years, too, UTM/db