Historic tramcars in service in Frankfurt/Oder 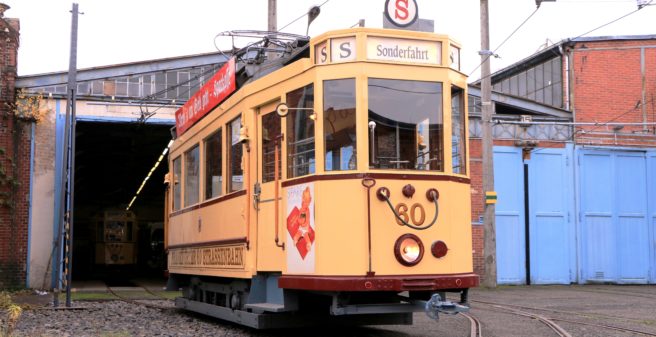 The association of tramway enthusiasts in Frankfurt an der Oder had its origin in 1999 because of an urgent need to take action: At that time, either a private association had to take over the responsibility for the preserved, historic tramcars (4 vehicles at that point of time) or all of them would have been sold for scrap.

Subsequently, the formal association “Museumswerkstatt für Technik und Verkehr Frankfurt (Oder) e. V.” was established. The objective was (and is) to restore, repair and maintain the historic fleet and to offer special trips on occasions. In 1999, the museum’s fleet included 3 tramways and 1 trailer, but in the meantime it grew to 6 motorcars and 3 trailers. 6 of them (incl. 1 trailer) are in operating condition and are available for special trips.

The name of the association also changed during its now more than 20 years of history. Nowadays the association is called “Historische Straßenbahnen Frankfurt (Oder) e.V.”. This name best describes what the club is all about and what its more than 30 members are committed to: the restoration and preservation of historic trams from more than 120 years of urban transport history.

For special occasions and/or on pre-booked special trips, the vehicles are available to revive the memories to the passengers. The members of the association are happy to guide interested visitors through their premises every first and third Saturday of the month and tell the story of 120 years of public transport in Frankfurt/Oder.

Homepage of the association: