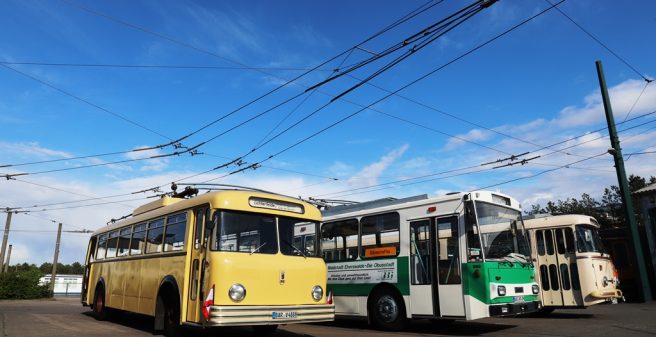 Every year the so-called veterans meeting takes place in Eberswalde, near Berlin. This isn’t about veteran soldiers, as one might suspect, but oldtimers on wheels. Actually, the event is all about historical trolleybuses, cars and trucks.

Alongside Wartburgs, Trabants and BMW cars, there were also several trolleybuses on display on 4 May 2019. This year’s veterans meeting took place at the depot Nordend of the public transport company BBG (Barnimer Busgesellschaft). The event has been supported by the local heritage preservation association DVN (Denkmalpflege-Verein Nahverkehr Berlin e.v. http://www.dvn-berlin.de/). Hourly tours through the city were made with the historical DVN trolleybuses.

There were the following trolleybuses on display:

[…] There you will find 6044 more Infos: urban-transport-magazine.com/en/historical-trolleybuses-in-eberswalde/ […]