Hydrogen Solaris for Frankfurt and Bolzano 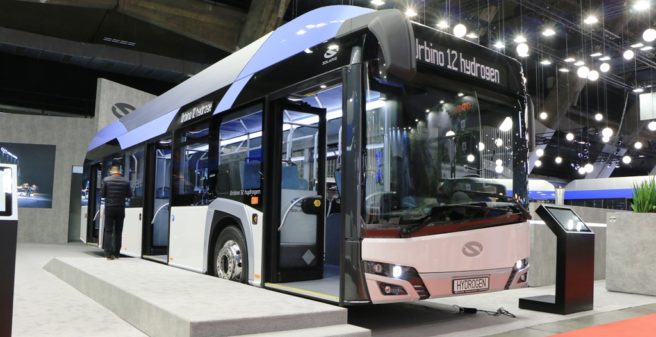 The municipal-owned In-der-City-Bus GmbH in Frankfurt/Main has ordered 13 hydrogen buses from the Polish-Spanish manufacturer Solaris Bus & Coach for delivery next year. They will be used on various routes in the city on the river Main. At the same time, the necessary supply infrastructure is being built at the depot area.

The technology used in the Urbino hydrogen makes for absolutely environmentally friendly transport, thanks to the use of energy supplied by a fuel cell (70 kW); The sole by-products of the chemical reaction that takes place in it are heat and steam. Electric power generated in the process of reverse electrolysis is transferred directly to the driveline, consisting of an axle with electric motors. What is more, each bus will be fitted with an additional electric power storage facility, i.e. a Solaris High Power battery. The hydrogen needed to propel the bus will be stored in gaseous form, in roof-stacked tanks.

Fuel cell buses were ordered by the pPublic transport operator SASA Bolzano in Northern Italy – actually the first of Solaris’ clients to opt for the hydrogen Urbino model. In line with the contract a total of 12 buses based on this state-of-the-art technology will be deployed on the streets of the Italian city. The official handover of the vehicles was carried out during a press conference that marked the finalisation of a deal signed two years before.

Where does the hydrogen come from?