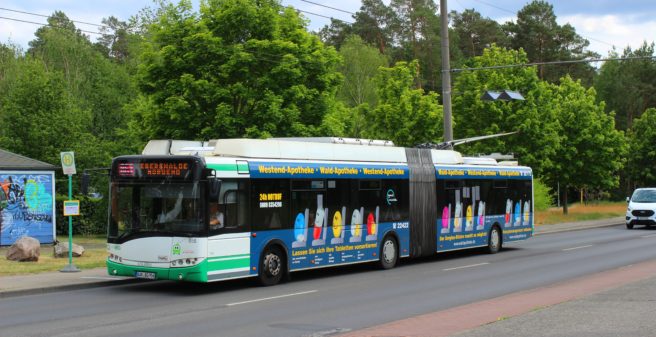 In recent years, electric mobility has also become an increasingly important topic for public transport in cities. In this context, trolley bus systems have established themselves as a modern and emission-free alternative to diesel buses. The infrastructure investments have so far required a corresponding traffic volume for the environmentally friendly systems to be viable from an economic point of view. In addition to track guidance on the overhead line, infrastructure elements such as switches and crossings, which are associated with not inconsiderable cost and maintenance expenditure are necessary. The trolley:2.0 project sponsored by Electric Mobility Europe (EME) is therefore investigating battery-electric trolley buses and how they can open up further advantages through in-motion charging concepts. The potential of this technology includes efficient and reliable operation, as the proven technology of the trolley bus is combined with modern energy storage technology. Owing to the onboard energy storage system, branches, crossings or other sections of track where electrification is costly or undesirable for aesthetic reasons can be designed without a catenary.

Moreover, additional operational freedoms can be used: relocation of circuits, extension of existing lines and expansion through new lines.

In April 2018, implementation of the hybrid trolleybuses began in the four project cities Eberswalde (DE), Szeged (HU), Gdynia (PL) and Arnhem (NL). So far, it has been shown that the expansion with in-motion charging technology pays off, especially in cities with a historic old town centre. In historical areas, the installation of the overhead line system can be omitted. Since the start of the project there have been various unforeseen challenges, including the COVID 19 pandemic, but trolley:2.0 is still largely on schedule and will be completed as planned at the end of 2020.

After the last interim report from 2019, the trolley:2.0 project and the partner cities have again seen many developments. Last year, for example, all cities invested in several hybrid trolleybuses that are already in use on some routes. Through power supply from both the overhead lines and the on-board batteries has particularly improved service in the outskirts of the partner cities.

In Arnhem, the trolleybuses are already able to operate autonomously for at least ten kilometres, thus ensuring local zero-emission public transport also outside of the city. In the future, it is planned that only battery-electric trolleybuses will be used throughout Arnhem’s city transport system. The sections without overhead contact line will be battery electric.

Completely local emission-free travel is now also possible in the Eberswalde’s city area, after BBG Eberswalde has converted its buses with lithium-ion batteries. BBG is planning the complete conversion of the currently diesel-powered regional bus line and intends to operate it as a battery electric trolleybus line.

To date, nine of the 12 trolleybuses have already been equipped with batteries for this purpose. From September 2020, the first battery-powered trolleybuses will operate on line 910.

Just as Arnhem and Eberswalde, the Polish city of Gdynia is working on expanding trolleybus lines throughout the metropolitan region. On the one hand, the plans focus on existing routes on which diesel buses are to be replaced by trolley and electric buses. On the other hand, the transport companies are also developing new trolleybus lines, which are to run on parts of the route without overhead lines.

In Szeged, Hungary, the economic efficiency of the systems will be increased by the development and preparation for the use of new midi trolleybus types (8m) based on batteries. The first midi-battery trolleybus was built in April 2020 and has already undergone several tests. Eventually it will operate on the 77A line in Szeged, where it will run for 30 km with up to 20 km without overhead line. The bus will benefit from a weight reduction of 20 percent owed to the composite frame, which also acts as an insulating material.

Challenges in the project process

There were delays in certain project steps in all four cities. Frequent causes were lack of certification of the vehicles, which took longer than planned, or technical problems with the batteries. In Eberswalde, for example, new technical hurdles such as the software compatibility of battery and bus regularly arose and repeatedly presented new challenges for BBG and battery manufacturers. For BBG Eberswalde, this meant that the conversion of the trolleybuses was enormously delayed due to the greater time required for battery procurement and installation. The new plan is therefore that the first battery trolleybuses will operate on line 910 from September 2020.

The consequences of the coronavirus have created additional challenges in the partner cities, as travel restrictions have prevented technicians from reaching the cities and delayed deliveries.

Study on SES systems in Gdynia

Due to the continuous exchange of information between the public transport companies and the respective project universities of Dresden, Gdynia, Delft and Gdansk, studies are always pending within the framework of trolley:2.0 to support the success of the project. In Gdynia, for example, a study was conducted on the possibilities of Stationary Energy Storage (SES) systems including the use of 2nd life batteries. A rectifier substation was equipped with an SES system to store recuperated energy. At the same time, power peaks from the upstream energy supply were reduced during energy withdrawal. This also reduced the cost component of 15 minutes of power supply and at the same time improved voltage stability in the catenary system.

Plans for the construction of a 350kW opportunity charger in Arnhem

The consortium partner Power Research Electronics is also currently developing a DC charger prototype, which will subsequently be tested integrated into the trolley networks in Eberswalde and Arnhem. This should enable hybrid trolleybuses to charge the battery for a few minutes at terminus stations and ensure safe circulation. The design should be ready by August and then tested. The final evaluation of the system is planned for December 2020 at the latest.

In the two years since the project started, the trolley:2.0 project supported by Electric Mobility Europe (EME) has helped to create a better basis for the evaluation of hybrid trolleybuses. The User Forum Meetings, which took place in Solingen in November 2018 and in Linz one year later, have improved the acceptance of trolleybuses in Europe, which are intended to make transport in cities locally emission-free.

“The trolley:2.0 project contributes to the current renaissance of trolleybus systems in Europe.”