In the Basque Country: A turntable for the bus! 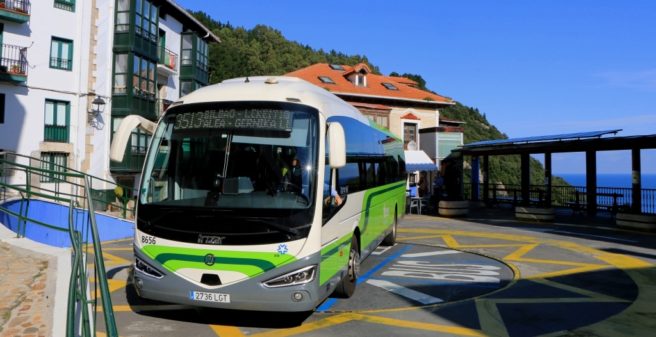 Irizar i4 Integral - operator Bizkaiabus on the turntable in elantxobe | © D. Budach

What do you do when a town is built so close to the hillside that the only major road runs just as narrowly between houses and finally ends at a small square that does not offer enough space for a bus turnaround? This is exactly what happens in the small village of Elantxobe in the Spanish Basque Country. The village of just over 300 inhabitants is so squeezed between the mountains and the sea that the Basques came up with a very rare solution for their daily bus service from Bilbao, the provincial capital located an hour away: “Si no hay sitio para que gire el bus, giramos la calle! – If there is not enough space for the bus to turn around, then we turn the whole street!”

Since 1991, there has been a bus turnaround at the point in the village where the only access road ends and turns into narrow and steep alleys for pedestrians. Line A3513 (Bilbao-Hospital Galdakao-Gernika-Lekeitio) arrives every 60 minutes from Bilbao or from Lekeitio. The bus usually takes less than 2 minutes to stop, board and disembark the few passengers and turn around on the electrically powered platform, before it continues its journey.

The turntable in Elantxobe (also known as Elanchove in Spanish language) was built new in 1991 and has already been refurbished twice since then. Previously, the buses had to move backwards about one kilometre and turned then moving back “in a triangle” – by any means not a very safe manoeuvre.

In Europe, there were turntables in regular service at the trolleybus systems in Solingen (since 2009 only used by the regular heritage trips), Bournemouth and Huddersfield, for buses on the Channel Island of Jersey, and outside Europe in Mexico and Japan, among others.

A view to Solingen: