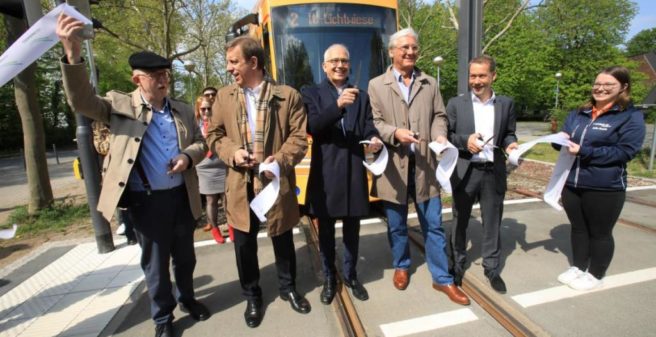 Today, on 25 April 2022, Darmstadt’s metre-gauge tram network has become a little longer again: The 1.1 km long new section branches off the existing line to Böllenfalltor at Hochschulstadion stop and runs via the intermediate stop Kletterhalle to the new terminal loop TU-Lichtwiese Mensa on the grounds of the Technical University. This significantly improves the accessibility of the so-called “Campus Lichtwiese” of the TU. Around 2,000 employees of the TU Darmstadt and the student union work here, and up to 10,000 students can also be found at the site.

Test runs on the new connection began on 19 January, and scheduled driver training sessions had been underway since the end of February. On 25 April, the official opening took place at 11 a.m. in the presence of Tarek Al-Wazir, Minister of Transport and Economics of the State of Hesse, Jochen Partsch, Lord Mayor of the City of Science Darmstadt, Dr. Manfred Efinger, Chancellor of the Technical University of Darmstadt, Michael Kolmer, Head of Mobility of the City of Science Darmstadt, Michael Dirmeier, Managing Director of HEAG mobilo GmbH and numerous representatives of the press.

The new line is largely double-tracked – with a short single-track section – and is predominantly embedded in a so-called sedum layer; the final loop at the university’s auditorium and media centre is double-tracked. The branch from the existing line to Böllenfalltor is a triangle – this also facilitates inbound and outbound journeys to Böllenfalltor depot. The Lichtwiesenbahn took two and a half years to build – the construction costs totalled 18 million euros.

Line 2, also referred to as “Lichtwiesenbahn”, serves the new section. It has a total of 11 stops on its route from the main railway station via the city centre with the central Luisenplatz and the castle (Schloß) to the Lichtwiese campus. Its previous terminus Böllenfalltor will continue to be served by line 9.

Further improvements in the route network

The new timetable for all HEAG mobilo lines entered into force on 25 April and offers service improvements on several lines of the tram and bus network. As far as trams are concerned, the express line 10 celebrates its return to HEAG mobilo and connects Griesheim from the “Wagenhalle” stop with Darmstadt’s main railway station.

The idea of such a fast line from Griesheim to Darmstadt is not new: there was already such a direct connection more than 20 years ago, before the then line 10 was integrated into line 9 in May 2000, which has since run every 7.5 minutes on school days and was extended to Bar-le-Duc Square. Line 9 will continue to run between the western edge of Griesheim and Böllenfalltor. But if you are in a hurry, it takes only twelve minutes to get from the Wagenhalle to Darmstadt’s main railway station. “In addition to line 6, there is now a second fast line that shortens travel time in the region. This means that the people in the district will also benefit from the improvements in the tram network,” explains Lutz Köhler, First District Councillor of the Darmstadt-Dieburg district and Deputy Chairman of the Board of DADINA.

The reintroduction of line 10 is part of the multi-stage new timetable concept with which HEAG mobilo intends to increase its line performance by up to 30 percent by 2024. After completion of the construction work in Frankfurter Straße, which will last until autumn 2023, line 10 will continue to Arheilgen. “One of the aims of our new timetable service is to provide a connection to the main station from all directions and thus, of course, also from the district,” emphasises Ann-Kristina Natus, Managing Director of HEAG mobilo.