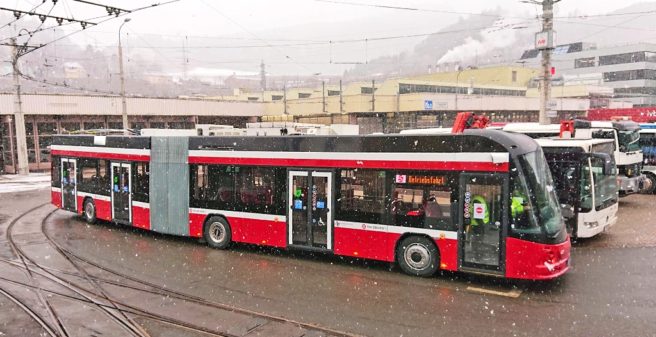 IVB Innsbruck plans to convert its bus fleet into electric operation by 2035 and will buy 4 to 8 new electric buses per year. The choice is between purely battery-electric buses and battery trolleybuses with dynamic charging technology which successfully operate in the major Austrian cities of Salzburg and Linz. For this, only a limited number of new trolleybus overhead lines would have to be (re)installed in Innsbruck; the trolleybuses can cover larger parts of the routes in battery mode. They would be recharged without loss of time on the sections equipped with overhead lines. The Innsbruck lines C, F, J, M, R, T and 404 are planned. Trolleybuses previously operated in Innsbruck 1944-1976 and 1988-2007.

For this purpose, one of the Hess articulated trolleybuses from Salzburg – no. 427 – has been sent to Innsbruck for testing. Test without passengers started on 10 February.

IVB is opwerating the bus in pure battery mode as there is currently no trolleybus overhead in Innsbruck.

The vehicle from Salzburg belongs to the latest generation of battery trolleybuses of the “lighTram 19 DC” model supplied by Carrosserie Hess in Bellach in Switzerland. The Swiss company has delivered 29 such trolleys to Salzburg in recent years, and 13 more have been ordered, all with “dynamic charging” technology. However, their batteries can be charged in the depot, too. The buses are 18.7 m long and offer a total capacity of 156 passengers, 38 of which are seated. Scheduled for delivery in 2023 and 2024 they will replace older articulated trolleybuses of the first low-floor generation, some of which have been in service on Salzburg’s extensive network for more than 25 years. The Hess trolleybuses are part of an agreed contractual option to supply up to 50 such vehicles. With the trolleybuses now on order, Salzburg will have a total of 42 such vehicles in service in 2024.