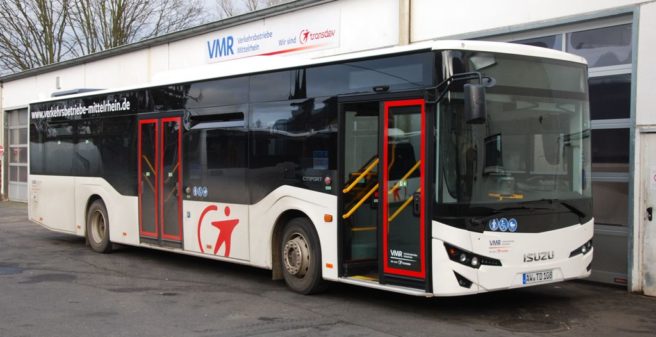 In 1901, the metre-gauge Brohltalbahn railway was opened between Brohl am Rhein (today a district of Brohl-Lützing) and Kempenich. Since 1927, the railway company also had its own buses: two Büssing type “III GLn” started service (the suffix “n” in the type designation stood for “low-frame”: a first attempt to reduce the entrance height of buses).

The day came when rail and bus operations were separated. The railway became a tourist railway (“Vulkan Express”) with occasional goods traffic from the phonolite quarry in Brenk to the goods station and the Rhine port in Brohl. The bus operation was transformed into the “Ahrweiler Verkehrs GmbH (AWV)” by the then owner, the district of Ahrweiler. In 2006, the district sold AWV to the Sterzenbach Group in Dernbach (Neuwied district), one of the largest German bus companies at the time. Relatively soon Sterzenbach sold his group of companies to the transport group we know today as “Transdev”.

At the end of 2021, Transdev procured several very interesting buses for its depot in Brohl-Lützing, which are currently extremely rare in Germany. These are 12-metre long buses of the “Isuzu Citiport 12” model.

Of course, Isuzu is a Japanese brand. The company was founded in 1916. In 1922, it began to copy the British “Wolseley A 9” passenger car under licence. In 1937, Isuzu presented the first Japanese-made diesel engine. Today, Isuzu is  a specialised company for the construction of vans and heavy commercial vehicles.

In 1965, the car manufacturer “Celik Montaj” was founded in Turkey, which has been building Japanese Isuzu commercial vehicles under licence since 1983. The company has since been renamed “Anadolu” (German: Anatolien) to “Anadolu-Isuzu”. Initially, 55.4 % of the shares belonged to the Turkish “Anadolu Grubu”, 16.99 % to Isuzu and 12.75 % to “Itochu Soji”, also Japanese. In 1996, the two Japanese companies increased their shareholding to a combined 35 %. Shares in Anadolu-Isuzu are traded on the Istanbul Stock Exchange – accordingly, around 10 % of the company’s shares are in free float.

In 2003, Anadolu-Isuzu began exporting vehicles to the European Union. The importer for Germany is “Omnicar GmbH” in Bühl, Baden.

Let us return to the Transdev buses at the Brohl-Lützing site. As already mentioned, they are of the “Isuzu Citiport 12” type. They are used in the greater Koblenz area. For their technical data see below.

Anadolu-Isuzu is not only active on the German market with Citiport and NovoCiti. For example, the “Regionalverkehrsdienst Gründau” (RDG) from the Main-Kinzig district (Gelnhausen) uses the Isuzu “Citibus”. The vehicle can be delivered as a two- or three-door version, measures a maximum of 9,515 mm in length, 2,409 mm in width and 3,117 mm in height including air conditioning. It is powered by the Cummins B4.5E6D210 B engine, which complies with the current Euro 6 d emission standard and produces 157 kW (211 hp). It has a single-wide door at the front, a double door in the middle and, as a three-door model, a narrow door at the rear. The number of passengers it can carry depends on the equipment of the car, for example whether it is a two- or three-door model. As a three-door car, for example, it can be registered for 71 passengers, 19 of whom will find a seat, while as a two-door car it can offer up to 26 seats.

Technical data of the Isuzu Citiport 12