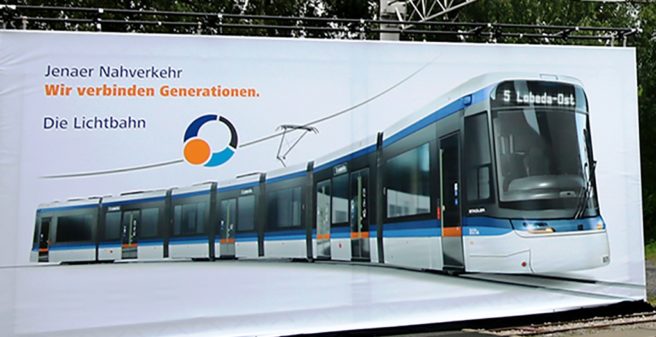 The design of the next generation of tramways for the city of light, Jena, was presented by the Jenaer Nahverkehr public transport company at its depot in Burgau on September 15, 2021. In the presence of Dr. Thomas Nitzsche, Lord Mayor of the City of Jena, Tobias Wolfrum, Managing Director of Stadtwerke Jena, Kai Phillipps, Head of Department for Local Public Transport and Local Rail Transport in the Thuringian Ministry for Infrastructure and Agriculture (Thüringer Ministerium für Infrastruktur und Landwirtschaft), and other guests, the managing directors of the transport company, Andreas Möller and Steffen Gundermann, presented the “Lichtbahn” – the local project name of the new tramcars. It is the TRAMLINK 800 model, which is designed and manufactured by Stadler in Valencia, Spain.

“This tramway comes up with countless technical innovations and at the same time impresses with its timeless and shapely design. It is a vehicle that was developed here in Jena for Jena together with all those involved in the project; it is a true Jena tramway. I would like to thank everyone who contributed their expertise to the design of the next generation of tramways,” said Andreas Möller, Managing Director of Jena Public Transport, in welcoming the guests.

The new tramways brings a lot of new functional and/or technical features compared with the Jena’s first generation low-floor tramcars which will more than 25 years old at the time of decommissioning. These are the result of changes in the state of the art and compliance with current standards and requirements. In addition, a broad spectrum of potential improvements was identified and included in the requirements profile during the preparation of the tender in industry and company dialogs, by means of extensive communication forums with operating and workshop personnel, and by involving a wide range of interest groups.

“These technical innovations make a significant contribution to emissions reduction, sustainability, increased attractiveness, complete accessibility and improved working conditions. They are an important building block for the success of a climate and environmentally oriented transport turnaround,” said Steffen Gundermann, summarizing the advantages of the “light rail”.

The meter-gauge tramways are designed to meet the needs of the city of Jena and its passengers in equal measure. Thus, the delivery order includes tramways in two different vehicle lengths. 16 vehicles are of seven-section design with a vehicle length of around 42 meters. There are four spaces for wheelchair users in the three multifunctional areas. There is also space for baby carriages and bicycles. 8 vehicles are designed as five-section tramways with a vehicle length of around 32 meters. The shorter version has two multifunctional areas, also with four wheelchair spaces. The low-floor vehicles are equipped with five or six doors on each side.

Stadler had won the tender fo the supply of 24 new tramways plus an option for a further 19 in August 2020. Delivery of the first new trams is expected for October 2022, start of revenue service in June 2023.