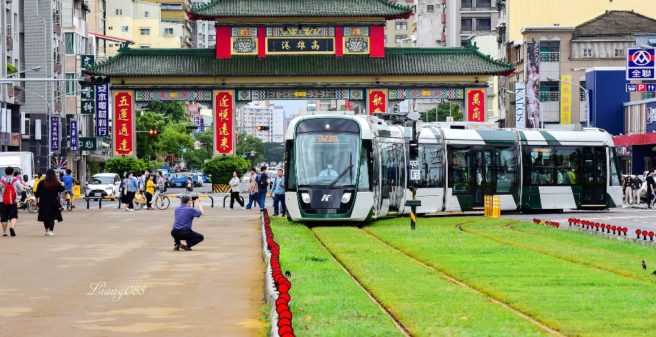 Kaohsiung (高雄; Ko-hiông in Taiwanese, Gāoxióng in Mandarin), with almost 2.8 million inhabitants in 2019, is the third most populated city in Taiwan after New Taipei and Taichung. Its is located in the south of the island on the west coast. Kaohsiung is known for its harbor, although more for commercial than tourism reasons. Hence it is also known as the Harbor Capital (港都) of Taiwan. Since 2008, the city is served by a two line metro system with a length of 45 km. The first section of the circular light rail has been opened in October 2016.

Kaohsiung has inaugurated two new tram sections on 12 January 2021 with a new fleet of Alstom Citadis X05 low-floor trams. The extensions are part of the circular light rail line and are extending the existing phase I on both ends from Hamasen to Gushan District Office and Lizihnei to Kaisyuan Park. The length of both extensions is 4.1 km. This extension follows phase I of the circular route which is in operation since October 2015.

The Circular light rail is operated by the Kaohsiung Rapid Transit. The southern section uses the tracks of the former Kaohsiung Harbour Line of which some remains are still existing including buildings and an old steam locomotive. The entire tram system is designed without overhead lines and the trams are equipped with on-board energy storage systems (batteries). Recharging takes place at several stops equipped with contact wire (conductor rail) via current collectors.

The light rail project in Kaohsiung

Phase I of the project consists in the section from Station C1 to Station C14, where Stations C3 and C14 are the transfer stations to the red and orange metro lines respectively.  Trial service from C1 Lizihnei to C4 Kaisyuan Jhonghua began on 16 Oct 2015. On 26 June 2016, the service was extended to stop C8 Kaohsiung Exhibition Center, and on 30 June 2017 to Dayi Pier-2. Hamasen was reached on 26 Sept 2017, marking the completion of Phase 1 Kaohsiung’s light rail. Phase I is operated with nine five-section articulated CAF Urbos 3 low-floor trams.

Construction of Phase II has now been opened on 12 January 2021. The northern section was originally scheduled to be completed in June 2021 with the rest of phase II but was delayed due to opposition of local residents. It is now projected to open in 2023.  When completed, Kaohsiung’s circular light rail line will form a 22.1 km loop around the city with 37 stations. The second phase comprises 23 stations has commenced partial operations with 9 stations, spanning 12.8 km (known as the Kaohsiung South Circular Light Rail line) on 12 January 2021.

Alstom has been responsible for the design, delivery and commissioning of 15 Citadis X05 new-generation trams, power supply and energy storage equipment, which are fully interoperable with the city’s existing network and planned extension. These are not only Alstom’s first trams operating in Taiwan, but also mark the inaugural Asian launch of its latest evolution of the Citadis range.

To integrate seamlessly and safely into the Kaohsiung cityscape, the Citadis trams run autonomously thanks to the Autonomy charging solution, combined with the Citadis Ecopack system of energy storage and catenary-free recharging system at each station. The trams also boast several new technologies, including permanent magnet motors for higher efficiency, as well as optimised HVAC (heating, ventilation and air-conditioning), which together reduce their energy consumption by 25%. Simplified sub-system integration and maintenance decrease lifecycle costs, while the trams are 97% recyclable.

The trams were manufactured at eight Alstom sites in France: La Rochelle for the design and assembly, Aix en Provence for the safety control system, Le Creusot for the bogies, Ornans for the motors, Tarbes for the traction system equipment, Valenciennes for the interior design, Villeurbanne for the on-board electronics, and Vitrolles for the on-board power supply switching boxes (Citadis Ecoswitch). Sesto in Italy was also involved for the traction system equipment, while the team in Taiwan is responsible for the onsite testing, training and warranty services.

A video of the new light rail alignment can be found here:

Further information and maps on Kaohsiung’s metro and light rail system can be found at Urbanrail.net: