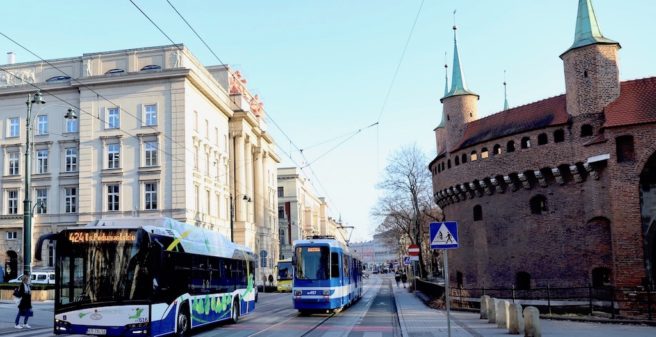 Poland is experiencing a boom in the electric bus sector. With the help of national and European funding, many cities are investing into (locally) emission-free buses. One example is Krakow in the South-Eastern part of the country. Krakow wants to improve its air quality and is investing into electric buses. 26 electric Solaris buses are already in service. By 2025, one third of the bus fleet of public transport operator MPK shall be electric. The remaining buses shall meet the Euro 6 standard.

As one of the first large Polish cities, Krakow started testing electric buses in 2013 already. Until 2016, MPK only deployed rented test buses. The first two Solaris Urbino Electric were purchased in 2017. Today, MPK’s electric bus fleet consists in a total of 26 electric buses which are:

According to press reports, MPK is saving up to 75 % in terms of energy consumption by replacing a standard diesel bus by the electric buses. As Polish winters can be very cold, a stand-alone oil-heating is used during the cold months.

Seven more charging stations are under currently under construction. In MPK they emphasize that assigning them a good place is crucial, because the “paperwork” associated with their construction takes a minimum of a year and a half.

The electric buses run in Krakow in the city centre such as lines 124/424, 154, 169). MPK’s electric buses currently have a range of roughly 150 km with a battery capacity of 200 kWh. This means that the buses have to be re-charged during the day. Re-charge takes place either via one of the charging stations along the line or alternatively at the depot. All electric buses can be charged in two ways: via a roof-mounted pantograph or while in the depot via a plug-in connector. Charging stations located on bus loops enable the operator to plan short intervals between runs in the regular timetable which are dedicated for fast energy recharge. Slow charging, also aimed to balance the  batteries,  takes place at night on the depot via the plug-in devices.

MPK’s bus fleet currently consists in 567 buses and 394 trams. The plan is that by 2025, 32 %, or 132 buses, will be fully electric and the remainder fulfilling Euro 6 and EEV standards or better. In 2019, MPK has launched a tender for further 50 electric buses for which Solaris and EvoBus Polska (Mercedes Benz) have submitted bids. The vehicles would be partially financed with EU-funds and shall be operated on lines 144, 173, 179 and 503. Deliveries are planned to be completed by the end of 2020. Recently, MPK Krakow has also signed the agreement with the Polish  National Centre of Research and Development to participate in the project “Zero-emission Public Transportation”.  In this project MPK would like to buy up to even 160 electric buses. By 2028, big cities in Poland are obliged to operate 30 % electric bus fleets.