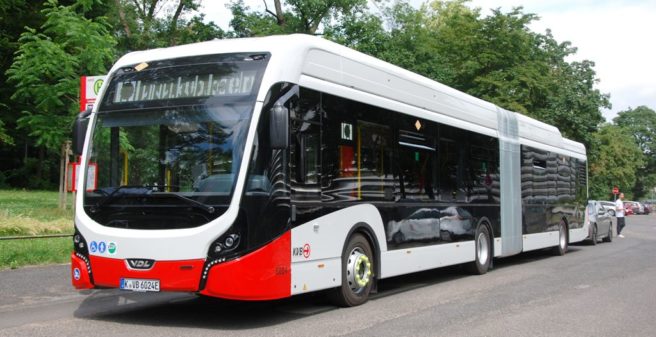 On June 29, 2021 urban bus transport in the city of Cologne was taken a big step forward: At the North Bus Depot of the Kölner Verkehrs-Betriebe / Cologne Transport Authority (KVB) – as part of the “Smart City KVB” project – Federal Environment Minister Svenja Schulze and Regional Transport Minister Hendrik Wüst presented the “charging ports” under which its electric buses will be charged overnight in the future, and they unveiled the first of the 53 new electric buses that the company will put into service this year 2021.

The “charging ports” are large carports for buses, with a charging station under the roof for each bus. A pantograph rises from the roof of the bus to the charging station, and during the nightly break in service, the car’s batteries are fully recharged within three hours.

Cologne, however, relies not only on overnight recharging for its battery buses, but also on recharging on the line. Line 133, for example, which has been operated with electric buses since December 2016, has charging stations at both end stations – at Südfriedhof (Höninger Platz) and at Hauptbahnhof (Breslauer Platz) – where the cars are to be recharged within six minutes each time. After all, the capacity of the batteries is designed in such a way that the buses can make three complete rounds on line 133 without recharging – in case there is no time for recharging due to “disruptions in the operating sequence” (meaning: delays caused by traffic jams).

KVB Chief Technology Officer Jörn Schwarze: “In 2016, we were the first company in all of Europe to use battery-powered articulated buses in regular service.”

According to Jörn Schwarze, experience with the nine electric buses (cars 6001 to 6009) that have already been in operation at KVB since 2016 (6009 since 2018) has shown that the batteries lose about 1.4% of their capacity per year. Schwarze: “So that’s only 14% in ten years, or in other words: after ten years, the batteries still have a capacity of 86%. So we don’t have to replace a single battery in those ten years, and then we either sell the cars or they just get new batteries then.”

The increase in battery capacity from the first trolleys of 2016 to KVB’s new electric articulated buses of today is remarkable. While the 2016 buses had a battery capacity of 133 kWh, the new buses have a capacity of 422 kWh, which is more than three times as much. The batteries are visibly making significant progress …

A resolution passed by the Cologne City Council determines that KVB must convert its entire municipal bus fleet (of more than 200 of its own vehicles) to electric propulsion by 2030. (Private buses operating on behalf of KVB are also to be fully-electric by 2030). At the same time, the electric buses already run on 100% green electricity, which KVB obtains from group  company “RheinEnergie” (within the Stadtwerke Köln group). Schwarze: “The electric bus activities of the KVB are an essential building block in Cologne’s climate protection. Now we are taking the next big steps. By 2030, we will reduce carbon dioxide emissions to seven grams per passenger kilometer. However, this is only possible because the federal and state governments are providing us with strong investment support.”

Schwarze also gave concrete figures: a diesel articulated bus costs around 340,000 euros today. This compares with a price of around 842,000 euros for the electric articulated bus. The difference of about half a million euros is subsidized at 80%, so that the transport company only has to pay 20% of the additional price. This subsidy program currently runs until 2024, but it can be assumed that it will be extended. (Author’s note: the price of a trolleybus should be about the same as that of a battery bus – the propulsion technology of both vehicles is very closely related).

Schwarze concluded with an interesting prediction. He said that by about 2030, electric bus batteries could have a range that would allow them to leave the depot in the early morning and not return for 24 hours without having to recharge during that time. By which he clearly rejected speculation that electric buses could never achieve sufficient range. And this prediction coincides with what an increasing number of electric bus manufacturers are also announcing. Schwarze literally said, “2030 is already tomorrow!”

However, according to Schwarze, recharging on the line is still the best solution from an economic point of view. However, Schwarze only has to go to the neighboring city of Bonn to come across a company with SWB that sees things quite differently. They opt for entire operation with overnight depot charging.

Since Cologne’s electric buses are constantly recharged throughout the day, an hour and a half at the depot is enough to fully recharge them. If the batteries were to run down completely, a full recharge would take three hours.

Federal Environment Minister Svenja Schulze emphasized that it is already possible to drive climate-neutral with electric buses if the electricity is generated by wind or the sun. Electric buses are not only good for the climate, they are also quieter and cleaner than conventional (diesel) buses. That’s why the German Environment Ministry is promoting the purchase of electric buses for local public transport. Currently, more than 60 cities in Germany are being supported in the procurement of around 1,500 electric buses. The Cologne transport authority is one of the pioneers in this field. Cologne is a prime example of how the transport revolution can be well planned and successfully implemented for everyone. Successful for the city, the company, its employees and the passengers.

Minister Schulze emphasized that the KVB has had good experience with the charging concept for its electric buses on Line 133. First and foremost, the cars are thoroughly charged overnight at the depot, and at the two final stops the batteries are also recharged using the fast-charging method. In this way, the batteries can supply not only the traction motors but also all auxiliary consumers with the necessary energy. Charging is always carried out using green electricity. Neither the production of electricity nor the operation of the buses produces pollutants such as carbon dioxide or nitrogen oxides.

Minister Schulze made special mention of the nightly recharging of KVB’s electric buses at its Bus Depot North. The buses are parked here under three “carports” with a height of 6.80 meters during their nightly shutdown – the longest of the three “charging ports” is 135 meters long.  There is a lane for each electric bus. Above this lane, under the roof of the “charging port”, there is a funnel with the power supply. A pantograph rises from the bus into this funnel, which thus makes contact with the charging station and can be “refueled” with electricity. All 53 cars can be charged with electricity at the same time.

The roofs of the charging ports are used by the Group’s sister company RheinEnergie with a photovoltaic system to generate electricity.

The 53 new electric buses now in service will enter service on the left bank of the Rhine on Lines 141, 145 and 149, and on the right bank of the Rhine on Lines 150, 153 and 159, which are now being converted to electric traction. Line 150 will be operated with the five new solo cars, while the articulated buses will be used on the five other lines. New charging stations for recharging on line have been installed, for example, at the terminal stops “Bahnhof Mülheim,” “Bocklemünd,” “Buchheim Herler Straße,” “Schüttewerk” and “Weiden Zentrum” and are currently being tested.

As early as 2022, a further 51 electric buses are to be delivered, with which the next bundle of lines will be converted to electric operation from 2023. KVB technology boss Schwarze: “By the end of 2022, one-third of all our buses will already be electric.”

For the further expansion of the Cologne electric bus network, a new bus depot (“Betriebshof Ost”) will be built in the Porz district, where the KVB will station only electric buses.