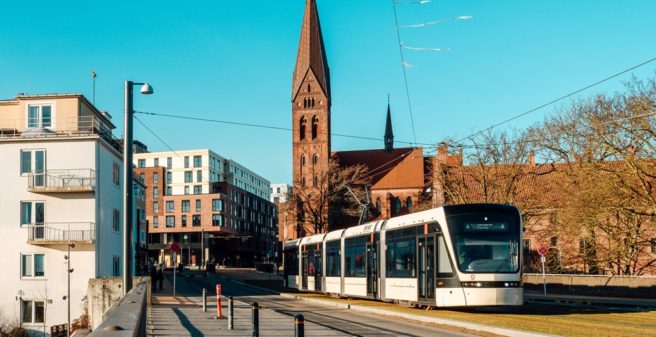 Some months later than originally planned, but not without ceremony, the new service started on 28 May 2022: Letbane is the new low-floor light rail system in Denmark’s third largest city, Odense.

For the 180,000 inhabitants of the city, this marked the beginning of a new chapter in the history of public transport: After the old tram was abandoned in 1952 and the only trolley bus line in 1959, only diesel buses operated in the city for more than six decades. In order to upgrade the local transport system with the overall aim of positively influencing the mobility behaviour of the citizens and making it easier to reduce the use of one’s own private car.

Planning for the construction of a new, modern low-floor tram began already back in 2010. Five years later the construction work of the first, 14.5 km long line started, which now – after some delay – is largely completed. We had already reported on the first test runs on the system in detail here: https://www.urban-transport-magazine.com/en/the-odense-light-rail-system-starts-testing/

A consortium of the companies COMSA (Spain), Efacec (Portugal) and Munck (Denmark) was involved in the construction of the infrastructure. COMSA was the consortium leader. Efacec’s scope of supply included substations, catenary, railway signalling, communication systems, passenger information, video surveillance, as well as the vehicle location system and the control centre.

The double-track route crosses Odense from the north-east to the south and serves 26 stops between the termini Tarup Center and Hjallese. The tram cars run every 7.5 minutes Monday-Friday between 7 am and 6 pm, every 10 minutes on Saturdays between 9 am and 6 pm and every 15 minutes during the rest of the day. In the medium term, the city expects 35,500 weekday passengers on the new service.

A second line from Odense Zoo through the city centre to Martins Minde is still in the planning phase as funding of the necessary 1.9 bn DKR (approx. 255 mn EUR) has not yet been secured. It will share the tracks of the first line for about 4.5 km of its length between between Vesterbro and Korsløkke and will be 9.2 km long in total. 10 new stations are foreseen.

Stadler Pankow GmbH has already delivered 16 five-car “Variobahn” trains, similar to those used in Aarhus and Bergen. Up to 14 of them are also needed in daily traffic. They are about 32m long and offer capacity for up to 200 passengers.