Liège: The first tram has arrived! 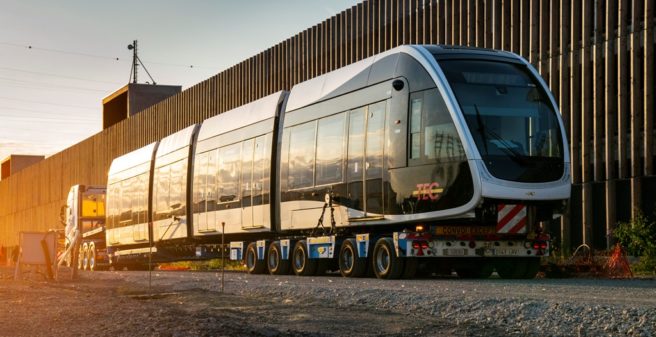 20 trams were ordered – now the first of them arrived at the future depot and workshop
location in Liège in South-Eastern Belgium. These are seven-car bi-directional tramways on standard gauge tracks, which were ordered from Spanish manufacturer CAF in September 2019 for the first new tramway line in Liège. The trams have 8 double doors per side, air conditioning, are low-floor throughout and offer 58 seats with a total capacity of 310 passengers, 3 sections for people with for people with reduced mobility and pushchairs and 2 sections especially for the visually impaired with space
under the seat for a guide dog. They are in total 45.4 m long and 2.65 m wide. Technically, the tram belongs to the CAF Urbos platform. However, the interior and exterior design have been personalised for the Liège tram.

In Liège, the city is to be the backbone of future traffic management. The need for action in
view of the overflowing car traffic in the city of 200,000 inhabitants had been obvious for a
long time, but the reintroduction of the tram was disputed for a long time, different variants
were discussed and rejected again and again. Once before, an extensive network of trams and
interurban railways had opened up the city and its surrounding area, but the last line
disappeared in November 1967. A large trolleybus network closed down by 1971, only diesel
buses were providing the public transport service.

The first line of a future, larger network, which is now under construction, is a modern low-
floor tramway line that connects important districts of the city area over a length of 11.7 km
from Sclessin in the southwest to Coronmeusse and Breussoux (Expo) in the northeast. The
tram runs largely on its own alignment at street level, grass tracks in many places. Priority at
intersections will ensure speedy travel. 23 stops will be served along the route, at peak times
every 4.5 minutes on weekday mornings. The total costs amount to approximately 360 million euros. The infrastructure is being planned and built by the newly founded Tram Ardent consortium with CAF and the construction company Colas as consortium leaders.

The operator will be the Walloon regional transport company TEC, which operates the
Charleroi light rail/metro as the only other means of rail transport in its area.
All 20 trams are to be delivered by the end of 2023. Test runs will start before the end of 2022,
the entire infrastructure should be completed by the end of 2023 – the current opening date is
25 April 2024.

A video of the line under construction is available here: