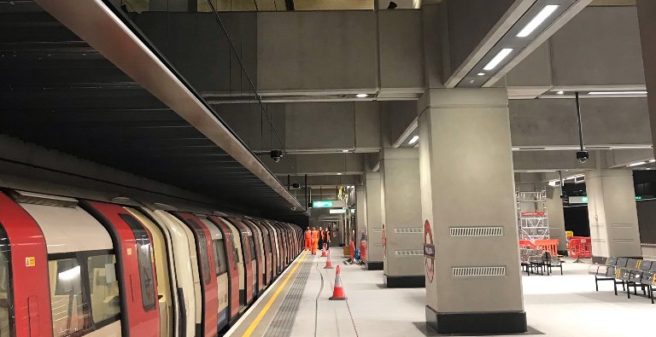 On 20 September 2021, the 3km line extension to Battersea Power Station went into service

On Monday 20 September, Transport for London (TfL) opened the doors to its two new Tube stations making up the Northern Line Extension, at Nine Elms and Battersea Power Station. The two step-free Zone 1 stations are set to dramatically improve the connectivity of these vibrant south London neighbourhoods and support the capital’s recovery from the pandemic at a vital time.

Major construction on the 3km twin-tunnel railway between Kennington and Battersea Power Station, via Nine Elms, began in 2015. Despite the challenges of the pandemic, the construction project stayed on track for an autumn opening. We reported about the first test drives here:

The Northern Line Extension is the first major Tube extension this century and is supporting around 25,000 new jobs and more than 20,000 new homes. In addition, construction of the extension boosted the UK economy and supported around 1,000 jobs, including 79 apprenticeships. TfL has delivered the Northern Line Extension £160m under budget, bringing its estimated final total cost to £1.1bn, despite the cost pressures brought about by the pandemic. The spending authority budget was increased to £1.26bn in January 2016, but TfL has worked hard through strong collaboration with suppliers to ensure the project provides value for money.

The Mayor of London, Sadiq Khan, said: “After years of hard work, I’m delighted that we’re able to open the Northern Line Extension today and it was great to have the chance to travel on one of the first trains between Nine Elms and Battersea Power Station. This extension will hugely improve the links between these vibrant, growing south London neighbourhoods and the rest of the capital, and will also help to support thousands of new jobs and homes as we move forward with London’s recovery from the pandemic. The new stations are beautiful and I encourage Londoners and visitors to start using the Northern Line Extension to get around and help them enjoy everything the capital has to offer.”

Transport Secretary, Grant Shapps, said: “London’s world-famous Tube network has two new stations from today, the first stops to be added so far this century, with names that will soon become familiar to Londoners as they return to public transport after the pandemic.

“Ahead of the opening of the Elizabeth line next year, these upgrades extend vital connectivity across the greatest city in the world and show the power of transport connections.”

Both new stations, which have been constructed primarily from stone, concrete, stainless steel and glass, use double-height ceilings to create large airy spaces. The new Tube station at Nine Elms has a very visible presence on Wandsworth Road, serving developments including the US Embassy and the re-developed New Covent Garden Market, as well as existing communities. The station has been designed so that 479 new much-needed rental homes, 40 per cent of which will be affordable, can be delivered above and around it.

The new station at Battersea, which sits in the shadow of Gilbert Scott’s Power Station and includes a gold-painted geometric roof with a giant skylight, opens onto Battersea Park Road and will hold a prominent position within Prospect Park when this new community space opens next year. Art on the Underground’s major new permanent artwork by London-based Brazilian artist Alexandre da Cunha – titled ‘Sunset, Sunrise, Sunset’ – stretches to a total of over 150m in length inside the ticket hall of the new station, which at 2,225m², could fit 80 electric double decker buses side-by-side.

Andy Lord, Managing Director of London Underground, said: “It is with enormous pride and excitement that we welcome our first customers to our new Northern line stations today. This is the first major Tube extension we’ve opened this century and the first new stations to open on the Northern line for 80 years. It has been a monumental effort during the most challenging of times but the opening of the Northern Line Extension could not have come at a more vital moment as London’s recovery from the pandemic gathers pace and people continue to return to the Tube network for work and leisure.”

Simon Murphy, CEO of Battersea Power Station Development Company, said: “The launch of the Northern Line Extension is a major milestone in the regeneration of Battersea Power Station. Improving transport links and connectivity to this area of London has been fundamental to the development from the very beginning, and we are delighted to have played a key role alongside TfL and others in delivering the first major extension to the London Underground this century.

“Seeing trains coming into the new station this morning was a very proud moment, which wouldn’t have been possible without the unwavering commitment of our shareholders. As we count down to the Power Station opening its doors to the public next year, we look forward to welcoming more visitors travelling on the new tube line from across the capital and further afield to enjoy the thriving riverside neighbourhood we are creating here at Battersea Power Station.”

Councillor Ravi Govindia, Leader of Wandsworth Council and Co-chair of the Nine Elms Vauxhall Partnership, said: “Travelling on the Northern Line Extension as it opened its doors today, and seeing excited passengers use these stations for the first time, is a once-in-a-lifetime moment that I will never forget.

“Wandsworth Council has always had huge ambitions for this area and we are delighted that our vision and planning to improve the connectivity of Battersea and Nine Elms has come to fruition. We worked closely in partnership with Battersea Power Station, the GLA, Transport for London, Lambeth Council and all the developers in the area to get this crucial transport link planned, funded and delivered.

“In less than 10 years we have achieved a fantastic new Tube connection here, transforming what was once a transport backwater south of the river. These stations help our residents to get to work and other parts of London more quickly, as well as opening up new opportunities for thousands of jobs and businesses in the capital. We’re all looking forward to welcoming visitors to Battersea, some perhaps for the first time, so I do encourage everyone to jump on the Tube and discover what a fantastic part of central London this is.”

The Northern Line Extension excavated around 850,000 tonnes of waste material in total during the lifetime of the construction project. Ninety-two per cent of the excavated material was carried in around 700 barge journeys along the River Thames to East Tilbury in Essex where it was used to create arable farmland. Transporting the excavated material in this way removed around 47,000 lorry journeys from the capital’s busy roads, reducing traffic congestion and helping to keep people walking and cycling safe. It also saved more than 2,600 tonnes of carbon emissions.

Around 100 members of station staff work at the two new stations, which are both step-free from street to train. Their opening today takes the total number of London Underground stations to 272 and means that 88 of these stations are now step-free.

The new stations will also feature new outdoor advertising opportunities, including a giant LED backlit gateway banner at Nine Elms, as 120 new advertising sites have been installed. Working with TfL and its advertising partner, Global, brands will be able to use these new assets to share their exciting campaigns with customers.

The opening of the Northern Line Extension comes ahead of the transformational Elizabeth line launching in the first half of next year, revolutionising travel across the capital.

Did the power station generate for the trolley buses back in the da?