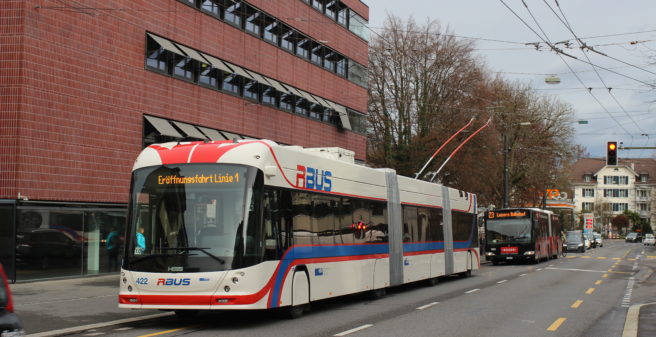 After the inhabitants of Lucerne had voted via a referendum against the reintroduction of an electric tram some years ago, politicians and the local transport operator VbL Verkehrsbetrieb Luzern decided to expand the existing trolleybus network. The most important trolleybus lines were operated with bi-articulated trolleybuses (DGT) and the infrastructure was expanded.

A total of 31 so-called “LightTram” double-articulated trolley buses in BRT design from HESS have been procured since 2014. Since 2006, three conventional trolleys had already proven themselves in Lucerne. The bi-articulated trolleybuses have a length of 24.7 m and a width of 2.55 m, enabling a capacity of 220 passengers (at 6persons/m2). The commissioning of the bi-articulated buses enabled the decommissioning of all older two-axle trolleybuses, some of which were used with low-floor trailers. The last of them were put out of service some two years ago.

The trolleybus network has been re-shaped in recent years and high-quality lines have been introduced as “Rbus”. On 15 December 2019, another important extension was added to the network: the main trolleybus line 1 was extended by 4.7 km from the previous Maihof terminal to Ebikon Fildern. Here at the “Mall of Switzerland“ the shopping mall and the entire district have now been connected to the catenary network. The bi-articulated trolleybuses run the entire route every 7½ minutes on the extended Rbus 1 line. On working days after 7 pm and Sundays before 20 am, a 15-minute frequency has been installed. An official inauguration has been taken place on 9 December 2019 with political prominence.

VbL’s trolleybus network has now a length of 42.3 km and currently consists in the following lines: