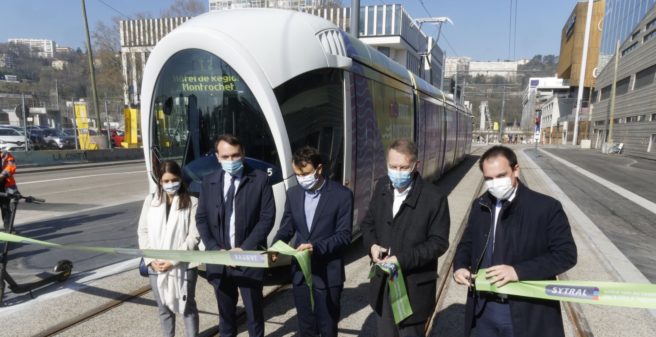 On 24 March 2021, Bruno Bernard, President of the Greater Lyon metropolitan area and Chairman of SYTRAL, inaugurated the extension of the T2 tramway line to “Hôtel de Région – Montrochet” in Lyon’s second arrondissement.

The second busiest line in the tram network with over 100,000 daily journeys in 2019, T2 used to link “Saint-Priest Bel-Air” to „Perrache” train station.

The T2 line now shares the infrastructure of the T1 line from “Perrache” and serves the same intermediate stations “Place des Archives” and “Sainte-Blandine” to its new terminus “Hôtel de Région – Montrochet”. The alignment Perrache – Montrochet – Debourg is already been served by tramline T1 since February 2014.

This new service supports the urban development projects in the Confluence district and significantly improves public transport services in the area.

“With a frequency of up to 2 minutes during peak hours between “Perrache” and “Hôtel de Région – Montrochet”, the extension of T2 offers an additional 50% capacity on this section”, explains Bruno Bernard. says Bruno Bernard.

The work, which has a budget of €11.8m, involved the creation of a new “turning zone” for T2 trains at the foot of the southern façade of the Hôtel de Région, on rue Paul-Montrochet, and the redevelopment of the Hôtel de Région – Montrochet station, the new T2 terminus, which now accommodates the T1 and T2 lines.

With this second extension, the length of the T2 line is increased to 16.1 km. This line is operated by Alstom Citadis 302 trainsets, the oldest of which are 20 years old, the age of the Greater Lyon tram network.

On the occasion of the extension of the T2 line, SYTRAL is celebrating the 20th anniversary of the tramway.

Since the return of this mode of transport on 2 January 2001 in the Lyon metropolis, the network has developed considerably and now has nearly 70 km of lines providing more than 365,000 daily journeys in 2019 with a ridership increase of nearly 80% between 2009 and 2019.

The tram is popular with users, meets SYTRAL’s plan to massively develop the surface network with efficient and sustainable mobility systems to strengthen the cohesion of the territories and encourage intermodality. SYTRAL plans to extend the T6 line and create 3 new lines (T8, T9 and T10) in its 2021-2026 mandate plan, accompanied by a redevelopment of public space that encourages active mobility.

As part of this anniversary, the oldest of Alstom’s Citadis 302 trams, the 801, has been fully decorated “The tramway is celebrating its 20th anniversary on the TCL network!“