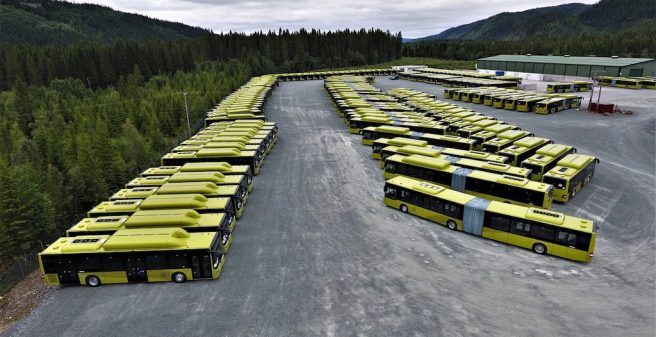 MAN Truck & Bus has delivered a fleet of almost 200 biogas and biodiesel buses to the Norwegian city of Trondheim with the clear objective of reducing the CO2 emissions in the city. The buses are being delivered to two different operators. 105 city buses are delivered to the transport company Vy Buss AS and another 84 vehicles went to the transport company Tide Buss AS. The fleet is a mixed one between 12 m and 18 m long buses.

Biogas and Biodiesel for a better air quality

With over 190,000 residents, Trondheim is Norway’s third-largest city. The cityscape is characterised by colourful warehouses as well as the new olive green MAN buses, which have been in operation since the beginning of August. MAN Truck & Bus delivered 105 city buses to Vy Buss AS and another 84 vehicles to Tide Buss AS.

The delivery includes solo and articulated buses which are powered by biogas and biodiesel. The alternative drive forms complement the image of a green, smog-free city, and are also exceptionally economical. Numerous Scandinavian metropolises and cities are already switching to new types of drive solutions, with the objective to significantly reduce the carbon footprint when it comes to public transport.

MAN Lion’s City (A21) vehicles have now been in operation in the Norwegian city for a few weeks. The solobuses are 12 metres long and feature an E2876 LUH Euro 6 gas engine. In terms of fuel, drivers can use both natural gas as well as biogas. The order also included the delivery of two variants of the 18-metre-long MAN Lion’s City G (A23) articulated bus: one with a D2066 LUH diesel engine in a special biodiesel version, and one with an E2876 LUH gas engine. Both variants fulfil the Euro 6 emission standard.

The transport companies also ordered MAN Lion’s City L LE (A44) city buses. These 15-metre-long low-floor vehicles feature the D2066 LUH diesel engine and are likewise powered with biodiesel. Comfort and safety are ensured respectively by a powerful air-conditioning system and an innovative camera monitoring system in the passenger and driver area.

The vehicles are not the first buses that the two Norwegian transport companies have ordered from MAN Truck & Bus. Back in 2011 MAN delivered 13 natural gas buses to Vy Buss AS; today the number stands at 260 city buses and coaches. The collaboration between Tide Buss AS and MAN began in 2003 with the delivery of 6 trolley buses. A total of 240 vehicles for city and tourist travel have now been supplied to the company.

The latest order also includes training for drivers as well as a service and maintenance contract. The deciding factor in awarding it to MAN Truck & Bus was, among other things, its many years of expertise in the gas-fuelled drive sector.

Vy Buss AS, formerly Nettbuss AS, is Norway’s largest operator, owned by Vy. It was founded on 10 February 2000 as the continuation of the bus operations from former NSB Biltraffik. Alongside its bus operations in major parts of Norway, it also operates buses in Sweden through subsidiaries. Tide Buss AS is Tide’s subsidiary for bus operations in Norway. The company is running services on several tender contracts such as in Hordaland (Skyss), Møre og Romsdal (Fram), Rogaland (Columbus), Sogn og Fjordane (Kringom), Trøndelag (AtB) and Vestfold (VKT), in addition to several express bus routes.

So with this order, I take it that the world’s northernmost tramway is not going to be extended?

Nothing communicated so far