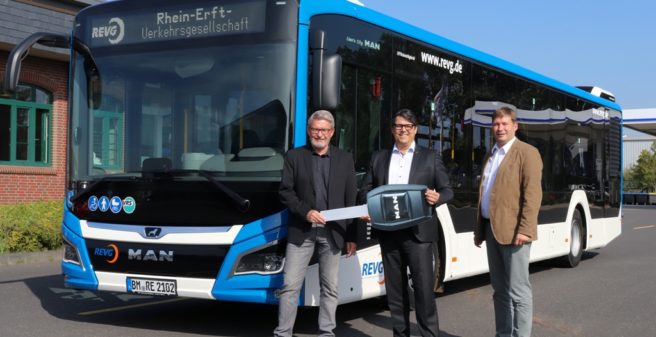 On September 22, 2021, the Rhein-Erft Verkehrs Gesellschaft REVG, the district-owned transport company of the Rhein-Erft Kreis (Bergheim district), took delivery of the first of two ordered “MAN Lion’s City 12 efficient hybrid” buses. Both bus will be used on REVG’s express bus routes, which are:

SB 93 from Kerpen via the A 61 freeway to Erftstadt (Lechenich and Liblar) and on via Brühl to Wesseling.

The buses on lines SB 92 and SB 93 change from one line to the other in Kerpen without stopping, so they are operated as a continuous round trip. Those passengers who want to travel from Elsdorf to Wesseling simply stay in their seats in Kerpen.

Unfortunately, the second car could not yet be handed over to REVG: as a victim of the delivery “crisis” for the e-chips, it is still waiting at MAN for its final completion.

As a hybrid bus, the new MAN converts kinetic energy into electric current during braking, which is stored in ultracaps on the roof. This electricity is not only used to start the bus the next time, but also to power the on-board electrical system, primarily the interior lighting – blue “Ambiente” lighting – as well as the heating and air conditioning. REVG estimates that the two hybrid MANs will consume 16% less diesel fuel than conventional diesel buses.

The two hybrid buses feature a large “special use area” for baby carriages, wheelchairs and luggage, but of course also for standing passengers on city and country roads. However, since they are also intended to operate on the highway, standing passengers are of course not allowed there, and the buses have three-point safety belts on all seats (required by law when driving on the highway).

They have a turn-assist feature that warns the driver should, for example, a cyclist be in the blind spot next to the bus when turning, which the driver cannot see in the mirror. Passengers have access to WLAN and USB charging sockets. And for their information, the coaches have large monitors. The floor in the bus has a wooden look (“floorboard”), while glass roof hatches ensure a bright, friendly interior.

The two new MAN vehicles are the first from a third manufacturer to join REVG. Previously, the fleet consisted of vehicles from bus manufacturers Scania and Mercedes-Benz. REVG has a total of 103 buses, three of which are now hybrid buses with the two new additions. In addition, there are 150 wagons from subcontractors – among them above all the DB subsidiary Busverkehr Rheinland.