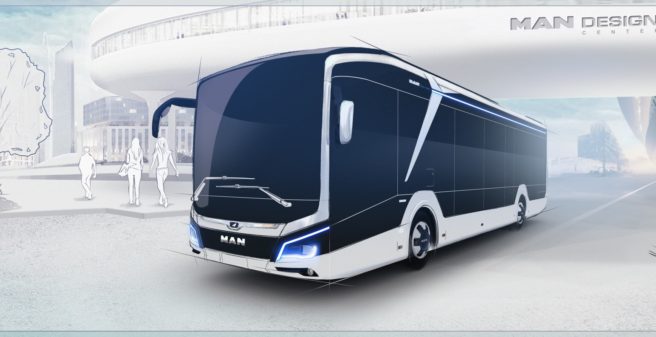 Gold for MAN’s eBus: An international jury of experts from more than 20 countries chose the fully electric Lion’s City E as the winner of this year’s iF Design Award I © MAN Truck & Bus

And the winner is … the MAN Lion’s City E! The fully electric city bus has been chosen as the winner of the iF Gold Award in the “Automobile/Vehicle/Bike” category by the design judging panel of the iF International Forum. The bus design team has now won an iF Design Award for the fifth year running.

78 international design experts from more than 20 countries chose this year’s iF Design Award winners from a total of 7,298 entries from 56 countries. The judging panel also acknowledged outstanding achievements in design with a particularly special award: the iF Gold Award. In the “Automobiles/Vehicle/Bikes” category, the outstanding design of the MAN Lion’s City E won over the experts to win the coveted award. The award winners will be honoured at a ceremony in Berlin on 4 May. “Compared to last year, the number of entries increased by around 1,000. With that in mind, we can take even greater pleasure from the fact that the MAN Lion’s City E came out on top – and won an iF Gold Award to boot,” says Rudi Kuchta, Head of Business Unit Bus at MAN Truck & Bus, who adds: “Once again, our design team has put in an incredible shift. With this latest success story, they have brought us one step closer to becoming the number 1 supplier in the European city bus segment. This also rings true with what many customers say: that the MAN city bus is the most beautiful city bus on the market.”

A new highlight of the cityscape thanks to smart edge design

You can tell that the fully electric MAN Lion’s City E belongs to the new MAN Lion’s City family of vehicles from the moment you first set eyes on it. The elegant and modern smart edge design of the bus allows it to make a particularly eye-catching and compelling impression as it drives around the city. What’s more, independent design elements emphasise the vehicle’s special feature: the electric drive. What is particularly eye-catching is the exterior design with its high-quality, lateral “blade”, which is typical of many MAN buses, and the elegant and well-proportioned roof structure. In terms of the vehicle’s height, the latter makes the bus less imposing while giving it a dynamic appearance. An impressive feature inside the vehicle is the optimised seating area in the rear, resulting from the omission of the engine tower. The developers used their creative freedom to establish more appealing light conditions and install up to four additional seats.

The judging panel acknowledged the ergonomically and aesthetically pleasing design of the electric bus, which is clear and consistent right down to the minutest detail. The official opinion of the design judging panel of the iF International Forum stated: “In terms of the exterior of the vehicle, we were impressed by the front end with its brand-specific headlights, not to mention the use of glass surfaces and modular body parts.” It went on to state: “The interior of the vehicle is characterised by glistening high-quality materials and a modern colour scheme that is reflected even in the minutest details.”

However, the MAN Lion’s City E, which was unveiled to the public at the IAA Commercial Vehicles fair in 2018, has a lot more to offer than outstanding design. Thanks to its well-conceived overall concept, this electric bus with its tried-and-tested cell and battery technology makes it as easy as possible for transportation companies to enter the e-mobility market. The 12-metre version of the Lion’s City E has space for up to 88 passengers. The fully electric driveline produces between 160 kW and a maximum of 240 kW. The energy for this comes from the modular batteries with 480 kWh of installed capacity. The Lion’s City E reliably achieves a range of 200 km over the entire service life of the batteries, and even up to 270 km in favourable conditions.

The iF Design Award has been awarded annually since 1953 on the basis of established criteria. These criteria include the outer appearance and design of the product, the degree of innovation, ergonomics and functionality as well as environmental aspects. MAN was amongst the winners at the very first awards ceremony in 1953 and, since then, has picked up a total of 15 iF Design Awards; four of which being the coveted iF Gold Award. “This award is one of the most prestigious design awards in the world. The fact that our bus design team has now won it for the fifth year in a row makes us extremely happy. It is also an impressive demonstration of how much innovation and outstanding design work goes into our buses. Thanks to the incredible level of collaboration across all of our departments, we have managed to achieve the ideal result for our customers, drivers and passengers once again,” says Stephan Schönherr, who, in his role as Vice President Styling Bus, is in charge of omnibus design for the brands MAN and NEOPLAN at MAN Truck & Bus. In 2016, the iF Design Award went to the MAN Lion’s Intercity, in 2017 to the NEOPLAN Tourliner, in 2018 to the MAN Lion’s Coach and in 2019 to the MAN Lion’s City. The fully electric MAN Lion’s City E, which will go into series production in the second half of 2020, is now the fifth prizewinner in a row.