MAN presented its first electric bus some 50 years ago 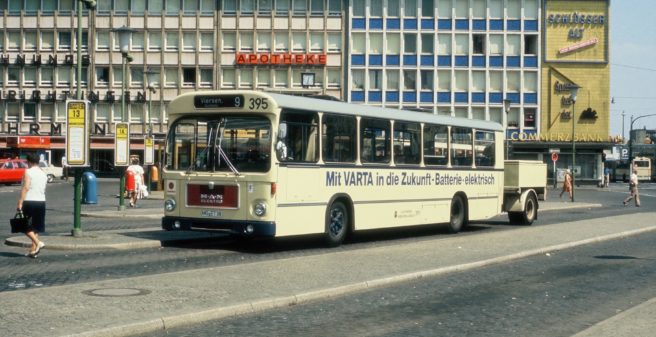 The future is electrifying! And at MAN Truck & Bus, the past was, too – back in 1970, the company showcased its first electric bus. Today, 50 years later, the MAN Lion’s City E is being launched as a fully electric series vehicle, thereby providing a contemporary and sustainable solution for entering the world of e-mobility.

It is impossible to think of sustainable mobility without considering e-mobility. Without it, the energy concept of the future is almost inconceivable. And yet, the innovative technology is not new – at least, not for MAN. This is because MAN’s first electric bus was unveiled back in 1970. Today, 50 years later, MAN Truck & Bus is launching a state-of-the-art, fully electric series vehicle in the form of the MAN Lion’s City E. The first mass-produced customer vehicles will be delivered in the last quarter of 2020. “The innovation and ingenuity of MAN is demonstrated by the fact that, five decades ago, we were one of the first companies to focus on e-mobility at all and that we have been promoting alternative drives considerably for many years,” says Rudi Kuchta, Head of Business Unit Bus at MAN Truck & Bus. He adds: “Now that the time and market are right for this pioneering technology, and the political framework fits, we can offer our customers an electric bus as a series vehicle which impresses with sophisticated technology and a sustainable overall concept. Not only does the electric motor come from within our own four walls, but we also develop the expertise that is crucial in the electric bus – such as the battery technology – within the Group. Furthermore we can support our customers with skilled and comprehensive advice, in order to make their entry into the world of e-mobility as simple as possible.”

How it all began: MAN’s first electric bus

On 13 February 1970, in conjunction with partner companies RWE, Bosch and Varta, MAN presented a purely electric scheduled-service bus to representatives of the press from all over Germany following two years of development. The 750 HO-M10 E model was presented on the new test track 1 at the Munich plant. The bus was to “make a positive contribution within the industry to combat air pollution and noise on inner-city roads,” stated a press release from MAN. Due to the ever-advancing “wave of motorisation”, even back then calls were made to improve the prevailing conditions in the cities. “In order to gain our own experience and to make a contribution for people and the environment, at the beginning of the 70s MAN decided to tackle this challenge,” says Henning Stibbe, Head of the Historical Archive at MAN Truck & Bus.

In January 1971, eleven months after the presentation and following comprehensive factory testing, MAN handed over the prototype to the transport company in Koblenz for a one-year test series in regular service operation. The electric bus, which served Route 7, was able to transport 99 passengers and had a range of 50 kilometres. The batteries were housed in a trailer and guaranteed a driving time of two to three hours. Another single-axle trailer with batteries stood ready in a changing station so that the batteries could be replaced quickly as soon as they were flat. “In addition to ensuring that the electric bus was constantly available, the fact that there were two trailer modules with batteries was advantageous as the batteries could be charged with cheap off-peak electricity,” says Stibbe. Up to June 1971, the MAN electric bus clocked up around 6,000 kilometres without any significant faults and without any exhaust emissions whatsoever in regular service in Koblenz.

But it is not just in Koblenz that MAN buses with alternative drives were used. In 1972 during the Olympic Games in Munich, the athletes were chauffeured back and forth between the Olympic Park and the Olympic Village in two electric and eight natural gas buses. For up to 20 hours every day, the vehicles did their rounds and dropped the top athletes from around the world off at their destination, safely and in an eco-friendly manner.

Two years later, on 15 October 1974, MAN handed over the first new battery-driven electric buses to the city of Mönchengladbach. The second-generation SL-E electric buses were in use there until 1979. New features included their battery units, which were expanded by 50 percent, and the reworked trailer module. It was therefore possible to achieve ranges of up to 80 kilometres and to change the batteries completely automatically. Dusseldorf and Frankfurt am Main also leveraged the advantages of the electric buses from MAN and successfully deployed these in local public transport. The emission-free and almost silent operation of the buses was a success.

From 1975 to 1988 the 11 km long Garath circular route 39 in Düsseldorf (which has been referred to as line 779 since the introduction of the Verkehrsverbund Rhein-Ruhr in 1980) initially operated 14, then from 1981 eight more of these vehicles which the Rheinbahn had taken over from Mönchengladbach. Triggered by the oil crisis in the early 1970s, the Federal Ministry of Research and Technology promoted alternative drive concepts in road traffic; the Rheinbahn played a leading role here. In 1982, the research project was expanded and all remaining electric buses were equipped with a pantograph to be able to fill up with electrical energy at the end station at Benrath station. The time-consuming replacement of the battery pack in the depot was no longer necessary. The electric bus project in Düsseldorf ended in 1988, after the first vehicles had to be taken out of service in 1982 due to technical problems. The 9063 bus that has survived to this day was taken out of service in 1985 and returned to the Rheinbahn in 2000 after a few intermediate stops. The electric bus 9054 is located in the depot for municipal transport at the Technical Museum in Berlin and can be visited during special occasions every year in September.

But for many years now, MAN hasn’t just been making an important contribution to maintaining clean air and combating noise in inner cities by means of its electric buses. Alongside highly efficient diesel engines which are constantly undergoing further development, for many years MAN Truck & Bus has been offering hybrid drives, as well as engines for operation with natural gas. This also means MAN is the market and technology leader for city buses with natural-gas drives in Europe.

The first MAN city bus with gas drive was premièred more than 75 years ago. It was deployed in local public transport in Nuremberg. The vehicle was operated with a trailer. It was possible to increase the range substantially as the gas tanks were located on the roofs of the bus and trailer. A special element was also that MAN constructed the complete vehicle, which was specifically designed for operation with gas. The expertise for this came from coach construction. MAN Truck & Bus launched a completely new gas engine on the market for the IAA 2018 – the MAN E1856 LOH. Amongst other things, it impresses with excellent economic efficiency and extremely low exhaust emissions. It can also be combined with MAN EfficientHybrid, and thus be operated even more efficiently.

MAN has been researching hybrid bridging technology since the 1970s. It helps to reduce emissions. Thanks to long-standing experience with electrified drivelines and components, MAN series hybrid buses have been rolling off the production line since 2011. Since then MAN has sold over 800 of the successful MAN Lion’s City Hybrid (A37) from the previous city bus generation. And a growing number of customers are opting for this clean and efficient hybrid solution for navigating inner-city traffic. “The hybrid bus is on trend. It is the first step towards emission-free transport,” says Rudi Kuchta and adds: “Many cities are responding to the current challenges of urban mobility, and transport operators are aiming to reduce the emissions and fuel consumption of their growing fleets. Following the successful Lion’s City Hybrid model, the new city bus generation with MAN EfficientHybrid provides the right solution here, thus continuing the story of success. This is also reflected in our sales figures. Almost all current city bus deliveries are driven by efficient hybrid technology.”

Both the new D15 diesel engine and the completely new E18 gas engine from the current MAN Lion’s City family can optionally be combined with MAN EfficientHybrid. The system plays a considerable part in reducing fuel consumption and emissions. Here, the standard stop/start function ensures quiet and emissions-free stops in city traffic. “Thanks to the new technology, for the first time the bus can be completely switched off during an interim stop at bus stops or traffic lights. We are so far the only company to offer this function of the MAN EfficientHybrid on the market,” highlights Kuchta.

Purely electric drives are therefore just one of many drive technologies that MAN engineers have been working hard on developing and improving for decades. The aim of MAN Truck & Bus has always been to reduce bus fuel consumption and emissions for the long term. And it has been successful in this endeavour – the permanent increase in efficiency of the diesel engine and the experience with electric, natural gas and hybrid buses demonstrate the high level of expertise of MAN when it comes to drivelines. “When it comes to alternative drive concepts, our buses have always set the benchmark. In order to provide our customers with state-of-the-art mobility solutions in the future, too, we will continue to channel all of our expertise and commitment into the continual improvement of existing technologies and into the development of new ones,” says Rudi Kuchta, summarising.