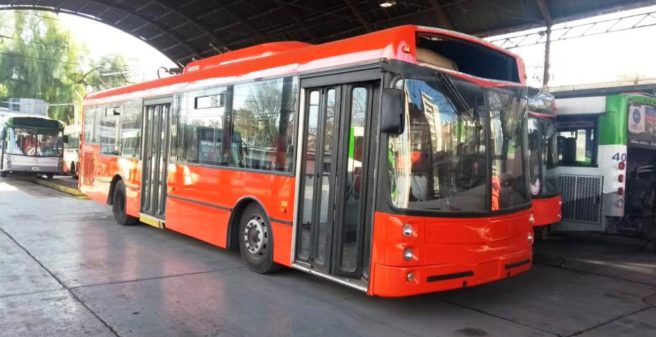 One of the Marterfer trolleybuses at the depot in late 2018, before the service resumed | © J.L. Guevara

The trolleybus service on the only remaining line in Mendoza, Argentina, located at the foot of the Andes in the far west of the country, is coming to an end. Currently, only two vehicles are still operational at all. After testing them in passenger service for some time, the transport company STM Sociedad de Transporte de Mendoza is now starting operation of new gas buses as well as various battery-electric buses from the Chinese manufacturers BYD and Zhongtong delivered during past two years.

Just a few years ago, urban transport in Mendoza was dominated by trolleybuses, with a network of six routes served by around 60 vehicles in daily service on weekdays:

The decline began with the necessary replacement of the aging fleet of used vehicles that had been taken over from Vancouver, Canada, in 2009/10. At that time, they replaced the by all means robust Krupp/Ludewig trolleybuses that had previously been the backbone of the fleet. All vehicles had been bought from Solingen in Germany in 1988/89. The Canadian trolleybuses, however, turned out to be by no means as reliable as the elder German trolleys, as they were already much older and more worn out when purchased.

As a consequence and for the first time, the transport company EPTM Empresa Provincial de Transporte de Mendoza (EPTM) ordered new vehicles from local production in 2013 – as a necessity of the nationwide import restrictions and self-sufficiency efforts of the economy. However, the operator had to deal with quite a number of teething problems, and in the end only 13 buses ever arrived in Mendoza, the last of which was actually never completed, but remained as a pure shell to serve as a source for spare parts. All were numbered nos. 401-413. The manufacturer was the Marterfer company in Santa Fé, the electrical equipment mainly came from Schneider Electric, was installed in EPTM’s local workshop itself and finally received approval for passenger service after numerous test runs.

Long-lasting political discussions and debates eventually culminated in the final consequence of the dissolution of the EPTM and its replacement with the newly-founded, but again publicly-owned STM. The STM showed little interest in trolleybus operations, and after a full write-off of the last of the Canadian New Flyer trolleybuses, all lines were converted to non-electric operations during the first half of 2017, with the last trolleybus moving into the Calle Perú depot on 4 May 2017. Even the new trolleybuses were moved out of the depot shortly afterwards and became soon vandalized. Some of the regular services were taken over by private bus companies as concessionaires, using various, mostly elderly types of diesel buses.

In the meantime, however, only two trolleybuses are still operational, no. 01 and 07, and the trolleybus service remains without any real prospects for the future and might be discontinued at any time – unless another “miracle” happens….

More information on trolleybus operation in the city can be found on the pages of the “trolley:motion” association, among others: https://www.trolleymotion.eu/trolleystaedte/stadt/?id=3

Other trolley bus operations in the country can be found in Córdoba and Rosario – see also: https://www.urban-transport-magazine.com/en/rosario-a-new-argentine-low-cost-trolleybus/