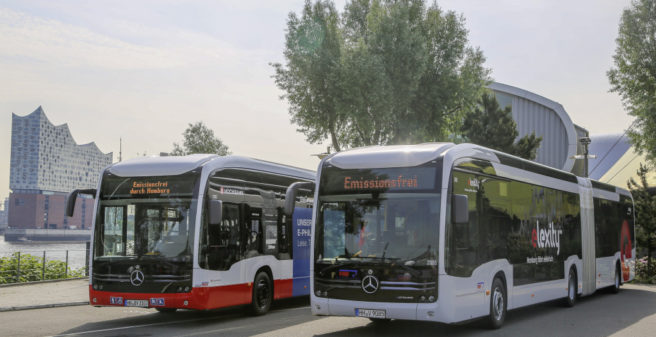 The interest in the event, which is symbolic of the transport turning point in Hamburg, was as extraordinary as the double handover itself. In the presence of Anjes Tjarks (Senator for Transport and Mobility Change in the Free and Hanseatic City of Hamburg), Claudia Güsken (HOCHBAHN Executive Director) and Nina Zeun (Project Manager for E-Mobility at VHH GmbH) symbolically accepted the keys for the articulated buses. They were presented with the new vehicles by Rüdiger Kappel (Head of Sales for Large Fleets and Authorities at Mercedes-Benz) and Thorsten Gallo (Plant Representative for Large Fleets).

Both buses are part of considerable large orders. Mercedes-Benz is currently in the process of supplying 37 eCitaro (20 already delivered) to Verkehrsbetriebe Hamburg-Holstein GmbH (VHH) and 34 eCitaro to Hamburger Hochbahn AG. Both orders include rigid and articulated buses, and both are follow-up orders after extensive practical testing with numerous eCitaro buses in daily operations around Hamburg.

The Mercedes-Benz eCitaro is the first and only electric bus to be developed and produced in Germany. An outstanding feature of the two eCitaro G vehicles now being delivered is their innovative solid-state batteries. Both have seven battery packs, each with an energy content of 441 kWh, serving as the basis for a practically oriented range even under demanding conditions. The batteries are charged by a plug connection in the depot. With the solid-state battery technology, Mercedes-Benz and the two transport companies are taking the lead in terms of technology, not only in the bus segment but also worldwide in automotive engineering. Solid-state batteries are characterised, among other things, by a very high energy density and a long service life. Furthermore, this battery technology does not require the use of cobalt.

Testing the eCitaroG in Vienna

The new Mercedes electric articulated bus model is currently in passenger service in Vienna, too, in test operation for the time being: after five electric standard twelve meter e-buses, Wiener Linien now has an 18-meter-long electric articulated bus in passenger test operation for the first time. Mercedes Benz‘ eCitaro G is operating on lines 14A, 15A and 66A between 10 June and 22 June 2021.