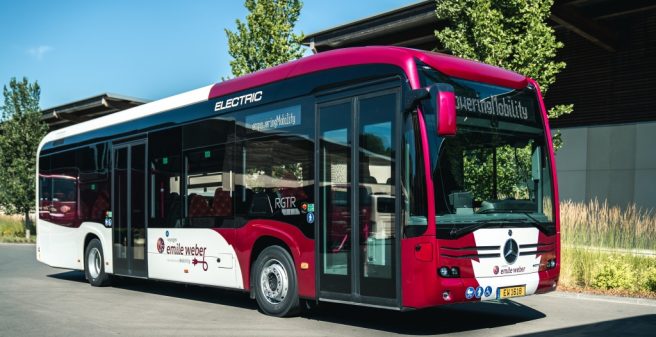 The Mercedes Benz eCitaro is a true European, as the current 20 deliveries to well-known transport companies in Scandinavia and Luxembourg show. The picture shows one of 9 new eCitaro for Voyages Emile Weber in Canach, Luxembourg I Photo: Mercedes Benz

Exactly one year ago, Mercedes Benz presented its’ electric eCitaro to the world. After an intensive testing phase, Mercedes Benz has achieved several important orders already. So far, five customers in Germany have ordered a total of 113 eCitaros. Additionally, Mercedes is now delivering 20 eCitaros to Canach in Luxembourg, Trollasen in Norway and Ystad in Sweden. Those order bring the order book to 133 eCitaros. An exclusive overview:

Although the general architecture of the eCitaro resembles the its’ Diesel predecessor, the eCitaro is a completely new developed electric bus. The powertrain of the new eCitaro is based on the proven and optimised electric portal axle ZF AVE 130 with electric motors at the wheel hubs. The peak output of the motors is 2 x 125 kW, while torque is 2 x 485 Nm. It is an inherent feature of such motors that this is fully available right from the start, ensuring appropriate dynamic performance even with a full complement of passengers. Lithium-ion batteries with a total capacity of up to about 243 kWh provide the power. They are modular in design: the batteries are split between up to ten modules, each supplying around 25 kWh. As well as two battery modules on the vehicle roof, the standard equipment includes four modules in the rear of the bus. In the eCitaro, these are taking the place of today’s powertrain combination of combustion engine and transmission. Depending upon customer requirements, another two or four battery modules are mounted on the roof of the eCitaro. Each battery module is made up of 15 cell modules as well as a control unit for monitoring purposes and as a means of balancing the charge of the battery cells. Each separate cell module houses twelve battery cells. Mercedes-Benz uses easily manageable prismatic cells with a capacity of 37 Ah each. With a minimum of six and up to a maximum of ten possible battery modules, transport operators can adapt their usage and charging strategy very precisely to individual needs. Opting for the largest number maximises the range of the buses, while a smaller number reduces the weight as well as the cost of purchase and allows more space for passengers – but potentially makes time-consuming opportunity charging necessary.