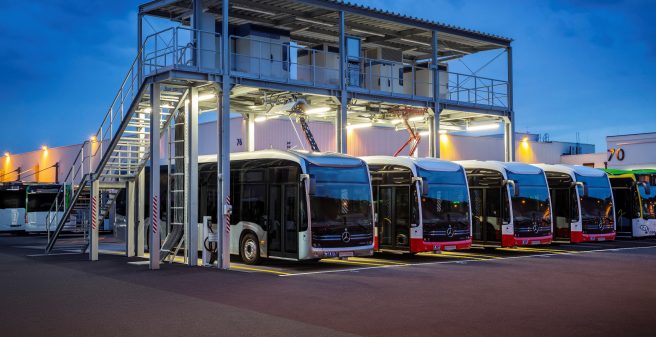 The new charging station at the Mercedes plant in Mannheim allows for pantograph and cable / plug-in charging I Photo: Mercedes Benz

Mercedes has commissioned a charging station for electric buses at its’ bus production plant in Mannheim, Germany. The station has a charging capacity for four buses: Electric busses can be recharged at any of the four positions via cables and plugs (plug in) with a power of 150 kW. In two positions there is also the possibility of fast charging via inverted pantographs with 300 kW. In the latter case, the inverted pantograph descends to the bus which is fitted with a charging interface on the roof.

The new charging station has several objectives. On the one hand, the eCitaro e-buses, which Mercedes itself uses for trial and test drives, is charged here. On the other hand, the infrastructure is used to demonstrate the recharging technology to customers. Eventually, the newly produced eCitaro buses will be charged here before delivery to customers so that they do not have to “start service” with empty batteries.

The new charging station in Mannheim has been installed next to the delivery hall where new vehicles are handed over to the customers. The recharging station is built as a “two storey” set-up. At the normal street level, the vehicles are charged whereas in the “upper floor” the electrical equipment is located.