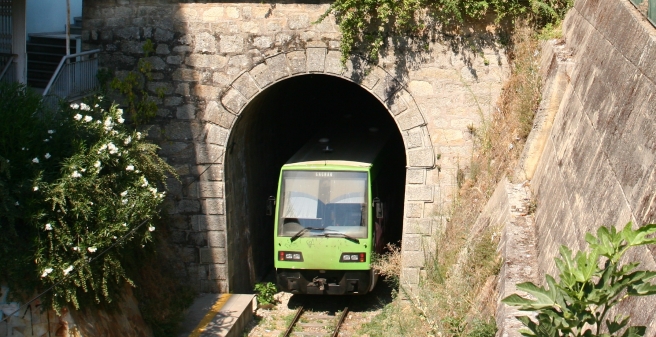 Metro Mirandela in Northern Portugal undoubtedly ranked among the least known urban transport systems in the world. Here, in the remote region of Tras-os-Montes („behind the mountains“), a modest public transport service was offered using diesel railcars on metre-gauge tracks. After 23 years in operation, this service was discontinued as of 14 December 2018.

To understand why just here, in a small town with barely 25,000 inhabitants, rail transport could survive, it might be helpful to take a closer look at its history:

Away from the trunk routes of Portuguese railways, more than 750 km of narrow-gauge railways helped to development the country’s rural „hinterland“. In principle, the operator used to be the state railway CP (Comboios do Portugal). Most of this system survived well into the 1980s – at a time when these rural railways in other parts of the world had already disappeared for quite some time. Portugal finally followed suit and closed most of these lines step by step. Among the few exceptions was a minor part of the once 134 km long line Linie Tua – Mirandela – Bragança. While CP had already abandond the railway services north of Mirandela in 1992, a local initiative led by the municipality of Mirnadela designed a new concept: 4 km of the former line were located within the city limits and were recommissioned in 1995, using the new brand name „Metro Mirandela“. 8 to 10 daily trips were offered between Mirandela main station and Carvalhais. Metro Mirandela took over the operations of the remaining 54 km to Tua (where it connected to the mainline CP) in 2001. Seven years later, the route was cut back to Cachão, 12 km south of Mirandela.

Initially, Metro Mirandela was entitled to receive grants form the EU in order to refurbish its infrastructure. The railcars themselves were maintained at a new depot alignment in Carvalhais. However, no further investments were undertaken since then. Of the original four railcars, only two survived until the very end. They were built in the CP workshops in 1995 using spare parts of older vehicles but are now definitely near the end of their useful life cycle.

However, the closure of Metro Mirandela might not be the complete end for the railway operator in the region. A new private investor has purchased a brand-new trainset in retro vintage, including a diesel locomotive dressed like an old steam engine. The train should be used on the remaining tracks even beyond Cachao, between Mirandela and Brunheda. It will be marketed as „Tua Express“ and should attract tourism in the region.

After the closure of public services in Mirandela, the only remaining narrow-gauge line in Portugal is now Linha da Vouga Aveiro – Sernanda and Espinho da Vouga – Oliveira do Azeméis with a total length of 66 km in operation.