Metz: A third line for the Mettis BRT system 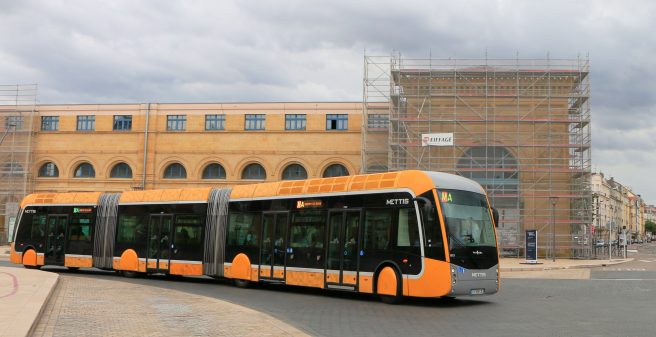 „No need for a tramway“: The French city of Metz – with some 125.000 inhabitants – decided against the construction of a full-scale rail-based tramway and went for another state-of -the-art but definitely more cost-efficient solution: A Bus Rapid Transit (BRT system), in France often referred to as BHNS – Bus à haut niveau de service. Two lines of 23 km length (thereof 5.5 km as a joint route) mainly use their own right of way. The bus lanes are physically separated from the rest of the road, and the unified design at each stop is quite similar to most other stops of the French tramway operator. Mettis is the brand name of the operation.

The obvious success of the system encouraged the municipal administration to start a detailled planning process for a third cross-town route. It will run from Avenue du XXe corps américain to Avenue de Pont-à-Mousson. The inauguration of the new line is envisaged for 2023.