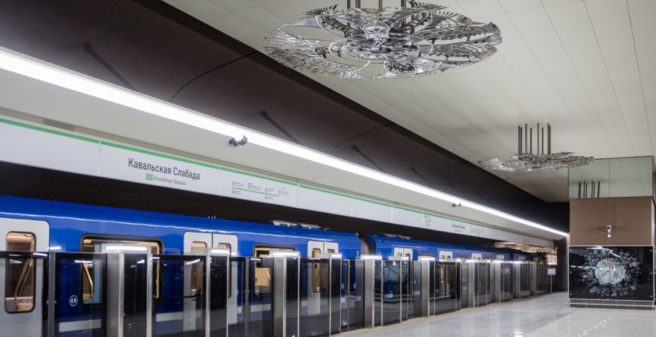 On Friday 6 November, the third metro line of the Belorussian capital Minsk has been inaugurated. The new line has been branded Zelenaluzhskaya (Zelenoluzhskaya) line. The first section is 3.4 km long and consists of 4 stations, connecting northern and southern suburbs of the capital with the city centre. Two of them have the connection to existing lines – Yubileynaya Ploshchad’ (interchange with Frunzenskaya station on Avtozavodskaya line) and Vokzalnaya (interchange with Moskovskaya station on Avtozavodskaya line and main railway station). This allows to relieve the road traffic along the main streets and avoid the main metro hub at Oktyabrskaya-Kupalovskaya stations.

The line is served by 6 four-car Stadler M110/M111 units, produced at Stadler’s factory at Fanipal, near Minsk. The 1524mm-gauge 825V dc third-rail trains have open gangways, CCTV cameras, air conditioning and USB power pliugs in the interior. Also, for the first time in the Minsk Metro, features like platform screen doors and moving walkway at Yubileynaya Ploshchad and Vokzalnaya stations are introduced. The line is fully accessible for wheelchair users.

Each of four stations is very unique in its design – Yubileynaya Ploshchad station is the deepest station in the network with a depth of 32 m below the ground. Passengers can get an access to the station through the Frunzenskaya entrance. Inside the station, illuminations and art work have been installed. Accurately placed in the ceiling, it makes an illusion of full circle, when you see it from certain points at the platform hall.

Named after well-known Belarusian poet and writer, Ploshchad Frantisheka Bogushevicha station features literature themes in the design. On the murals called Knitting Machine and The Belarussian Book, you can read the quotes of the country’s well known writers.

The so-called “Road Tree” sculpture is welcoming commuters at the Vokzalnaya station, which is the widest station on the line with a width of 16m. It is made in stern black-white-red tones, with crossing lines reminding the roads.

Kovalskaya Sloboda station refers to the blacksmiths who used to live in this area a long time ago. It is the single-vault station, the ceiling is decorated with forged art installations, which resembles papercutting images. The walls have been decorated with graphic art on shockproof glass.

The southern extension of line 3 is currently under construction and expected to open by 2023, with three more stations and a separate depot to be opened. The northern extension is in the planning stages. In total, the line will be 14.7 km in length and consists of 14 stations. A 37 km circle metro line 4 is also planned.

More information about the Minsk metro network can be found here: