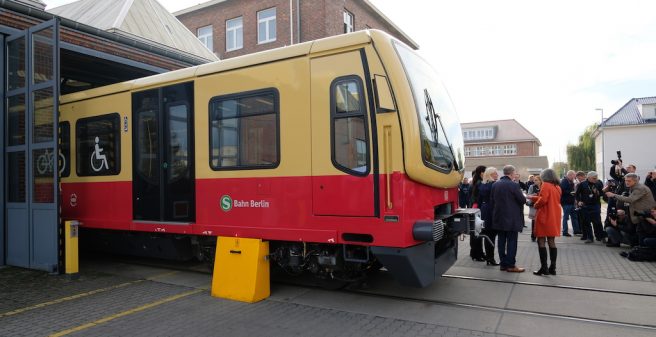 It looks similar to the “new” S-Bahn generation, but is the “old generation”: the 1997 – 2004 built commuter trains of the so-called S-Bahn Berlin Brandenburg has been fitted with the same exterior and interior design than its new Siemens Stadler built counterparts (Series 483/ 484) which will be delivered from 2020 on. Series 481 has been built in Hennigsdorf by DWA/ Bombardier and is now refreshed in order to offer an increased passenger comfort, but there are also improvements on the technical side in order to improve availability.

In the coming years, all 309 2-car train sets, 618 cars in total, will be rebuilt and modernized until 2022. In 2019, a total of 7 to 8 trains are scheduled to go into operation. More than 300 components have been checked to see whether they need to be replaced or merely modernized.

In addition to “externals”, the vehicles were also technically modernized to improve the reliability of the vehicles. The car bodies were completely gutted and refitted. The biggest changes include:

The vehicle layout and the position of the seats remain unchanged. The differences of the new color scheme is limited to the absence of the black strip under the windows and the black highlighting of the doors. The red looks a bit lighter than the previously traditionally used dark red of the S-Bahn Berlin which has not been changed since 1928, except for exceptions during the wall.

The complete conversion is financed by the states of Berlin and Brandenburg within the framework of the interim transport contract. The 2-car train of the now modernised BR 481 (BR for Baureihe, German for “Series”) has been presented on 22 October by S -Bahn CEO Peter Buchner, Regine Günther, Senator for Environment, Transport and Climate Change, Ines Jesse, State Secretary of the Ministry of Infrastructure and Regional Planning of Brandenburg, VBB CEO Susanne Henckel and Alexander Kaczmarek, DB Group Representative for Berlin. The train entered service on line S47 and is now in daily service.