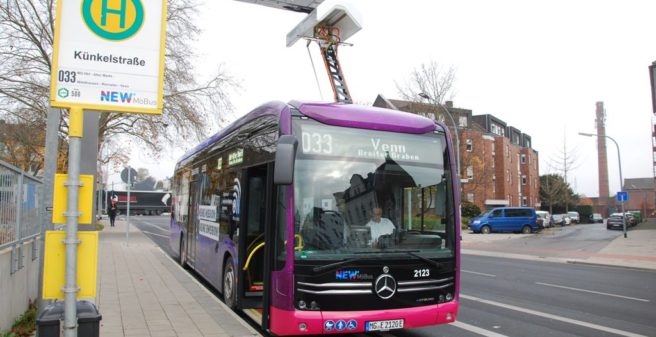 Bus line 033 operates between Breiten Graben / Venn district via Waldhausen, the city centre (Alter Markt) and the main railway station and Künkelstraße / Eicken district. Venn and Eicken are located in the north of the city, Venn rather northwest, Eicken rather northeast. On the way from one terminus to the other, the buses to the main station first head south to the city centre. According to the timetable, the buses take 33 minutes to cover the entire distance.

For this line, NEW had purchased four Mercedes-Benz eCitaro numbered 2121 to 2124 (the first two digits of the car number indicate the year of purchase). The buses have a special paint scheme that emphasises the “magenta” colour, which all Mönchengladbach buses display, especially at the rear, more than on the other cars. In addition, there are large areas on the sides in a relatively dark blue. And here on the sides, the e-buses show the slogan “My mission – no emissions” in large letters.

The buses are recharged after each round trip at the Künkelstraße terminus. This is done with the help of a pantograph that rises from the bus to the charging station (“Panto up” system). The charging system has be supplied by Siemens, the pantograph by Schunk. Most importantly, they are thoroughly charged overnight at the depot.

When Mercedes first presented its eCitaro, it was still said that the vehicle was primarily intended for overnight charging at the depot. But Mercedes also offered the possibility: “If an operator wants to recharge on the line, we’ll make that possible, too.” Mönchengladbach is one of these operators.

Another interesting detail about Mönchengladbach’s electric buses: NEW had originally ordered its electric buses from another manufacturer, who was also supposed to deliver in 2019. But the manufacturer was struggling with technical problems. When they struggled to fix the problems, NEW cancelled the contracts with this manufacturer and placed a new order with Mercedes.

Line 033 runs every 20 minutes, and all four cars are needed for its operation.

Range per charge: about 180 kilometres

Mileage on the line per bus and day:

around 215 kilometres, therefore also recharging on the line (opportunity charging)

Recharging posts at Künkelstraße and in the depot

Charging time at Künkelstraße: 6 to 7 minutes

Charging time at the depot (at night): 4 to 5 hours

Manufacturer of the charging technology: Siemens

Savings in emissions per bus and year: 50 tonnes

Savings in diesel fuel per bus and year: 18,750 litres

WLAN and USB plugs throughout the bus